noel said:
I dont think the community is the problem, the game just isn't very fun atm so the competitiveness has gone and the playercount/amount of people taking it seriously is low. Therefore more lamers/less admins
Click to expand...

foggy said:
It is a trivial matter indeed, my dear mature chap; nothing hurts me more than seeing the forum filled with nonsensical extraneous garbage!
Ah, i miss ye olde tyme when i could spend a lovely evening reading walls of text written by gentlemen in top hats about dueling and open rebalancing, or when the moderation team clenched our male genitalia harder than gestapo
Now the self-infatuated man-children only discuss our "toxic community" and continue "contributing" to "relevant topics" by posting in the e-x-a-c-t same threads making the exact same arguments over and over and over and and over again instead of letting the thread die!
Phooey!
Click to expand...

heh
who put you on a horse that high?
i'd ignore the first comment if it was written by sev or hex because they kind of earned their status here to criticize shitposters
what about you? you are not funny, you are not informative, i don't see any guides tutorials or frag videos by you. Almost all of your comments are simply reactionary. What is exactly your contribution to this forum?
I expect at least a 500 word response and reflection by tomorrow noon, young man! Or i'll tell your dad you used his credit card to buy devs their edible crayons!

Haha. Funny.
It's almost as if I have to contribute something to point out problematic users and actually contribute information from experience, on-topic, to threads.

2cwldys said:
Highly insensitive, immature, irresponsible players who hold sanctum behind player avatars and identities so it somehow makes their bad (or in certain cases, very unfunny, extraneous, and yet meme-filled) behavior or demeanor hold no consequence.
Click to expand...

Not as immature as banning someone from a server they own and pay for though right?

2cwldys said:
Totally unrelated to movie battles.
You provided the server, we provided the community.
Click to expand...

Community that hates you kk.

Community which exercised their own rules because you were acting erratic, breaking rules, and were increasingly toxic? Yes.
Fortunately for you though, we have ourselves a new host. But that's enough for topic de-railing for one day.
People like you, and like Foggy, are responsible for the toxicity on Mb2.

2cwldys said:
Community which exercised their own rules because you were acting erratic, breaking rules, and were increasingly toxic? Yes.
Fortunately for you though, we have ourselves a new host. But that's enough for topic de-railing for one day.
People like you, and like Foggy, are responsible for the toxicity on Mb2.
Click to expand...

do you want to join the cult of ragnos

i just want to have fun playng this gaem

yoinkboink said:
This is the BEST star wars mod ever released so far, without any doubts in my mind. We all knew that. With a setup this good, it makes me wonder how the community got so fucking bad lol. I've been playing on and off for 3 years now and it has only gotten worse. If I could take a time machine to 2017 community I'd just fuckin stay there. Holy shit the absence of moderators on every duel server is killing the mode, god damn. Servers aren't as populated as they used to be, meaning if you wanna play duel, you're gonna play on the only server with more than 6 people on, whichever one that may be. And there's never any mods, so people like Heinrich can openly lame me on EU OFFICIAL of all places and not be punished.
I didn't get salty at being lamed over and over for just standing around or trying to duel today or the other night, and sure Heinrich, if you wanna comment something like "lol saltyfag get fucked noob" you totally can. I just miss this fucking game, bro. I miss when it fucking worked lol this game is being literally ruined by the community it has. I'm probably just gonna alias every single time I join a server now, cause theres no sense of playing together to have a good time. You're playing against everybody else in the server, whether it be open or duel or fa, to see who is the singular person who gets to have a good time. And its a damn shame, this game used to be really commendable, but I would now probably pay a friend or loved one never to download this mod.
My main point isn't to be woke or anything lol im just wondering man... with a game this fucking good, how did it get this bad

EDIT right after posting: inb4 rage comments from the people ruining the servers

well i cant say that i agree with the whole thing myself in the sense that like you i see a great many places where that issue exists and it is depressing to see because for me im quite new to the whole thing myself and yet at the same time there are many places where it feels like you will be dogged on just for a bad game or bad play or a mistake that you make. But I do hope if no one else said earlier that there are definitely places/servers where that stuff isnt tolerated and im glad i was lucky enough to go into those servers really early or i may be feeling the same anger you are at this all the time! If you ever do wanna talk or play if you still play mb2 lmk but yeah i see other people earlier making jokes or saying that star wars games will have that immaturity that to me feels like a bit of complacency like we know its wrong for people to say the n word at someone or other messed up derogatory words and whatnot and yet practically half of the people feel like thats just how it is here or are fine with and do it themselves so if you are still playing mb2 hmu we can chill and enjoy the game together!

noel said:
I dont think the community is the problem, the game just isn't very fun atm so the competitiveness has gone and the playercount/amount of people taking it seriously is low. Therefore more lamers/less admins
Click to expand...

Nothing more needs to be said. The game simply isn't fun and balanced for competitive play hence why it's turned into a glorified chat room.

ez.HTD said:
Nothing more needs to be said. The game simply isn't fun and balanced for competitive play hence why it's turned into a glorified chat room.
Click to expand...

the game is fun when skilled people are playing it because there is some form of challenge, but when i get on now it's a bunch of whitenames who i've never seen before who barely know how to play the game, and sitting there and curbstomping toddlers for 6 hours is not my idea of fun(not in the game, anyways, and figuratively speaking here).

ever since all the recognizable names ive come to know and play with over the years dropped off due to the recent patches, there has been no point in playing the game, many of those names post on the forums more often than they actually play the game, now.

Call me crazy, but I feel like MB2 was more toxic compared with this time last year. 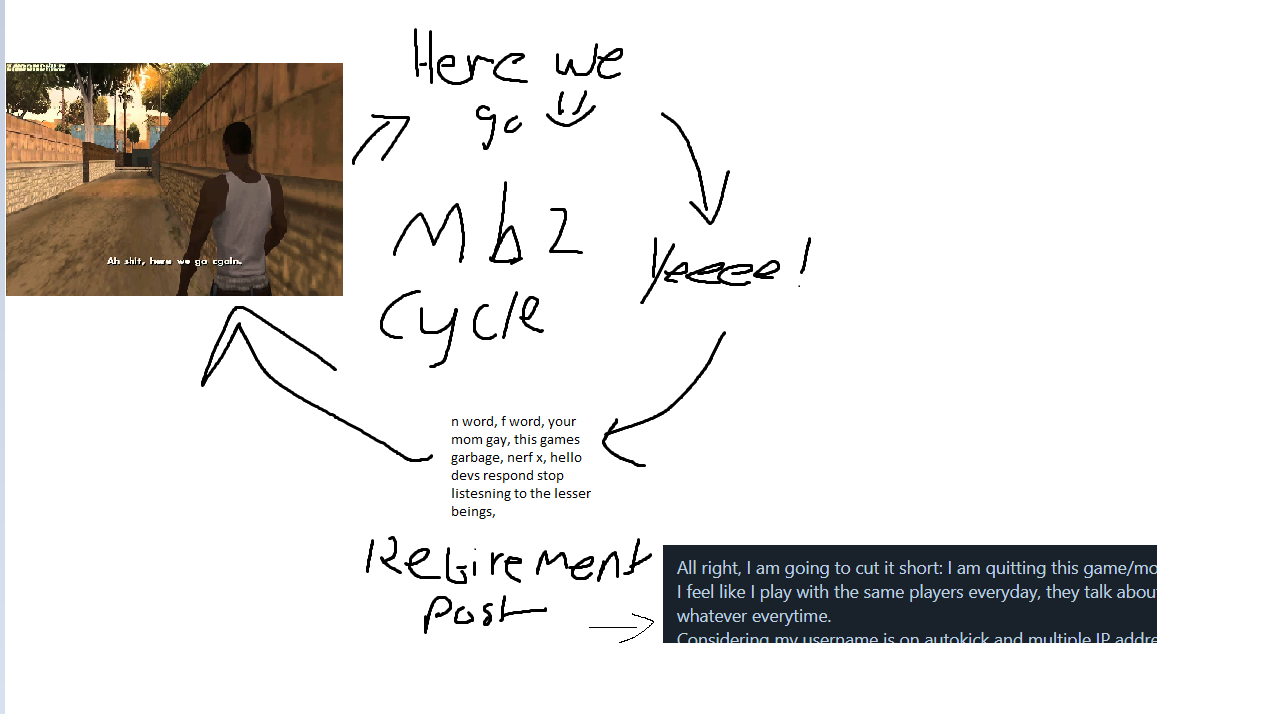 ez.HTD said:
Nothing more needs to be said. The game simply isn't fun and balanced for competitive play hence why it's turned into a glorified chat room.
Click to expand...

This just goes back to the devs making the classes unbalanced and not reflect of each other in a fun way, and allowing classes like Jedi and wookie to curbstomp while newer players use the default skill builds with their bounty hunter classes and get destroyed making them eager to try dueling in which they get whooped by tryhards while very skilled duelists like me just force them to bend the knee.