I made this crosshair a while ago after a lot of pondering and testing about what the theoretically most-optimal crosshair would be. Recently I accidentally torched my MB2 installation and had to re-input my config and mods, so I remembered how bad the regular crosshairs are, so I felt like I should post this one for the benefit of any other... optimizers. 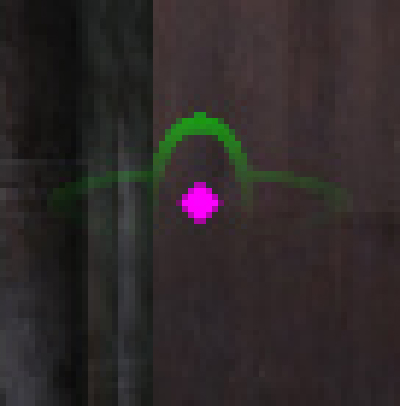 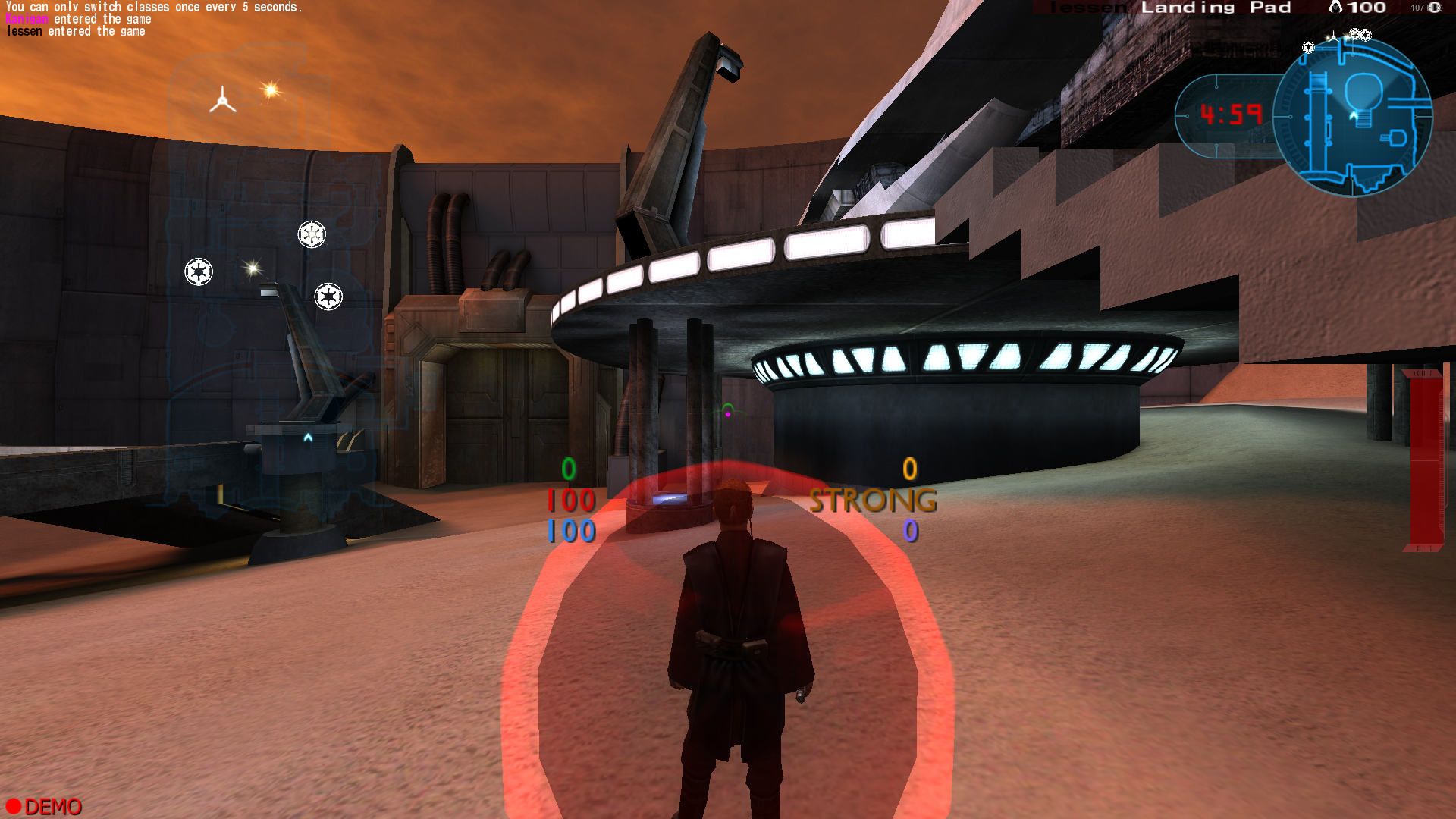 Theoretical Merits:
- Since it has Magenta AND Green, it's highly visible at all times. Except if you're looking at a watermelon. I lose track of single-color crosshairs in certain parts of certain maps.
- It's better than a simple dot crosshair because it has some other stuff around the dot to make the whole thing more visible. I find tiny ultra-minimal crosshairs a little hard to keep track of, sometimes.
- The dot is opaque, but the stuff around the dot is translucent, so it doesn't ruin visibility.
- The vertical oval frames the head of the target, and also implies a head-shape, which is useful in some abstract way.
- The horizontal oval provides some kind of abstract contextualization I can't articulate. Maybe it implies shoulders. I'm sure it's important.
- Very importantly: both ovals fade out towards the bottom of the crosshair, so that when you have your crosshair at head-height, your crosshair doesn't totally block off the target's body and cause you to lose track of what you're shooting at.

Basically it has all the merits of a opaque crosshair, a translucent crosshair, a big crosshair, a small crosshair, a magenta crosshair, and a green crosshair; and it has aaaalmost none of the downsides. And it has these cool ovals that imply the shape of your target, or something.

At some point I'm gonna get around to making a dual pistol version too.

Bind each gun to a different key around your hand. You should never have to scroll to find a weapon. You should have instant access to any gun (or Melee). Instant, confident access to Melee is essential for surprise kicks.

Download this mouse acceleration driver and play around with it. The way I've got it set up, I have very precise, smooth/slow aim at long range and I can still do almost effortless 180s. If set up properly, it has none of the issues that people associate with mouse accel. Edit: Actually, nah. Just switched to 800 dpi 2 Sens, No Accel, and it seems just as good if not better. If you have desk space.

Try TehPandemic's Battlefront sound pack. It makes all the guns sound considerably less harsh on the ear (while not necessarily making them less punchy-sounding), which, in my experience, makes it much less stressful trying to focus on aiming in a gun battle.

Set cg_thirdpersoncameradamp and cg_thirdpersontargetdamp to the same value. Valid values are between 0 and 1. If they're different values (as is default: 0.3 and 0.6), then when you strafe your crosshair will slide a little bit in one direction or the other. The crosshair remains accurate, but it's a little messy having strafing affect your crosshairs position on the screen. I use 0.6/0.6. 1/1 is completely damped so that the camera rigidly follows your mouse movements, which I think is too blurry and chaotic in situations that demand constant mouse movement. 0.6/0.6 is a little squishier so your view remains a bit clearer in shaky situations.

Ban all tactical assault crosshairs. Nobody needs them, and they cause millions of deaths every second of every day of every month of every year of every decade of every century of every millennium of every...

You know what forget it.

From my experience the best crosshair for blasters is no crosshair. Focusing on bullets is much more effective than focusing on crosshair in certain fights (like the usual spray-and-pray fights). You can even bind cg_drawcrosshair 0 to some key and cg_drawcrosshair # to another key (# = numberofyourchosencrosshair) to switch it on or off depending on your needs.

S o l d i e r said:
From my experience the best crosshair for blasters is no crosshair. Focusing on bullets is much more effective than focusing on crosshair in certain fights (like the usual spray-and-pray fights). You can even bind cg_drawcrosshair 0 to some key and cg_drawcrosshair # to another key (# = numberofyourchosencrosshair) to switch it on or off depending on your needs.
Click to expand...

Yes, totally. I've played with No Crosshair too, and it's real fun and definitely teaches you a lot about paying attention to what your shots are actually doing. My main beef with that is just that I lose track of where exactly the center of my screen is too easily, so, while it's super workable for weapons with a high fire rate, it makes guns with a low fire rate much harder to use. Makes it harder to land the first shot accurately, even if you can adjust after that first shot... the first shot can be really important.

Definitely recommended as a training tool and even, as you said, as a quick-toggled tool. I think if you play without a crosshair for a while then you can still apply the lessons learned from it with a crosshair on, though.

Yea, I meant various types of blaster rifles, not all blaster weapons, like blaster pistols.

self-bunp. I was playing without this crosshair for a bit because I deleted my config again (like i did before initially posting this) and didn't fix everything right away, and was reminded how much other crosshairs suffer from either (situational) visibility issues or from actually blocking your vision at various ranges, and how well my attempt at an "optimal crosshair" really seems to succeed in those regards.

so bunp, i have a lot of faith in this design.

also i see the file has 16 "views," which i guess are downloads, so i'm interested if anyone tried it and has any comments, found it useful, irritating, or just didn't see a difference.

(I got one review, the user kept gravitating towards aiming with the green part instead of the magenta diamond part, throwing off his habitual aim, so he went back to using a white dot. hmmmmmmmm)
Last edited: Mar 15, 2017

I've been using the crosshair for a while now, and gotta say it actually drastically improved my aim with weapons like westars (especially when flying and aiming at an enemy straight below you) and pistol, compared to the default crosshair which I used before. The green part definitely helps keep track of the dot, rather than distract from it, in my experience.

But I really haven't noticed much of a difference with any of the other guns, and as you & other users have already mentioned, focusing on your 'bullets' and where they fire from is way more effective than a crosshair at close-range fights.

overall, 10/10 would recommend to all my friends and their moms

damn if you're using it with Westars, I really gotta make a dual-pistol version. iirc the center of non-dual crosshairs isn't accurate to either gun if used for duals. But this crosshair's designed primarily for accurate head-height firing at mid to long range so it also suits the function of pistols.

Close range and random-spread spray in general are both not that crosshair-reliant imo, except for orienting "generally" where you're aiming, but even in those contexts this crosshair still gives a benefit of standing out perfectly in absolutely all situations (as opposed to, say, a white crosshair on Kamino).

Is there anyway to make it smaller? Mine seems really big in game

I've used for a long while now, cant lie i don't have to worry about not seeing it anymore and losing sight of my aim for the perfect shot (not that i can shot any way but you know xdddd) other wise i'd day its useful and the RGB compatibility is nice too in that i can change the pink i personally don't enjoy the color so i use a light cyan-ish color for the dot works nice 11/10

Is there any chance you will be settling for 1 nickname anytime soon?

<3 tl;dr my name cycling is a big complicated personal in-joke and you will not stop it, but also, I'm staying as lessen probly <3

In-game? No, , aliasing is the life. And the title of this thread is half a joke; in using the in-game name I was using at the time instead of my forum name, I knew it would be outdated and confusing quickly.

But see, "Vermont" (green mountain) had a good run, namewise; I played really well, consistently, and impressed a lot of people, and retired it on a good note. It's the optimal crosshair of one of my most optimal "phases."

so anyway, Changing names is fun, trying on different identities. It affects how I play. There's this guy Kylø Ren or somethin' (not sure exactly how it's colored) who always plays as Kylo, even if it's stacking, and plays in a very Kylo-ish way, like, it seems very angry and very flashy, but it's honestly a very effective kind of flashiness. Him and Goliath are both interesting examples of a very cartoonish route of seemingly finding the self-seriousness to tryhard via RPing as self-serious characters. Every name change for me is a slightly different "RP." I'm not very cohesive. also i just slept through three of my classes. :[ finding the energy to tryhard in games or in life is An Important Problem to me.

pretty decently settled on "lessen" for the forums though. I think. Probably. Maybe. It's less 'en Vive Ut Vivas or Oddlewad 'n i like it like that. It's subdued, it's self-referentially less of an identity, so I'm less likely to feel like I want to switch off it. My most "true" fake-ass fake name is Bracket, or Brackass, (and there's great joke reasons why that name works as my True Name), and my true legal name is Bennett, if'n'yr'wann'n a completely concrete pointer-to-me, it's Bennett. "Hey Bennett! Stop Changing Your Name!" "Fuck Off!" and so on

still changing avatars in accordance with mood tho. I don't like the idea of presenting and maintaining one single persona when I feel like I vary so much
<3 tl;dr my name cycling is a big complicated personal in-joke and you will not stop it, but also, I'm staying as lessen probly <3

Self-bunp because I think this thread is full of great material for gunners and I want the community to have good gunners.

oi i was thinking about this the other day, for my game vidoes so it would be more easy to see

This is the tastiest crosshair. (watermelon)