Lunarbase is a level we all know and love. It was one of the teams first levels released back in Build 16 created by Chairwalker. Chairwalker also created our SBD model, Korriban, Yavin Assault, as well as weapons such as the A280, Projectile Rifle, and PLX-1. For the most part, Lunarbase hasn't been updated anywhere near as much as some of our other popular levels like DOTF have been over the years. Only fairly recently was an additional route from tunnel to the main doorway of side was added.

Years ago Shadriss started work on a visual only update to Lunarbase. Sadly real life had its priorities and he needed to leave the team before he could finish it and some other projects he was working on. I have been sitting on an outdated version of that visual update for years and never managed to get the most recent version from him. Now, why am I talking about this and not about changes to DOTF? Well, I wanted a small side project while I thought about some of the changes I wanted to do and to take a small few week break from working on the same thing as I had been since last summer. I saw the old Lunarbase work in progress in my level folder and thought I would make an attempt to give it some life as a short term project. I wanted to bring some life back into Lunar and update it to look a bit more standard Imperial in some aspects. Even including some minor touches and ideas from Jedi Outcast single player levels.

So without further adieu, lets go over some of the changes shall we? 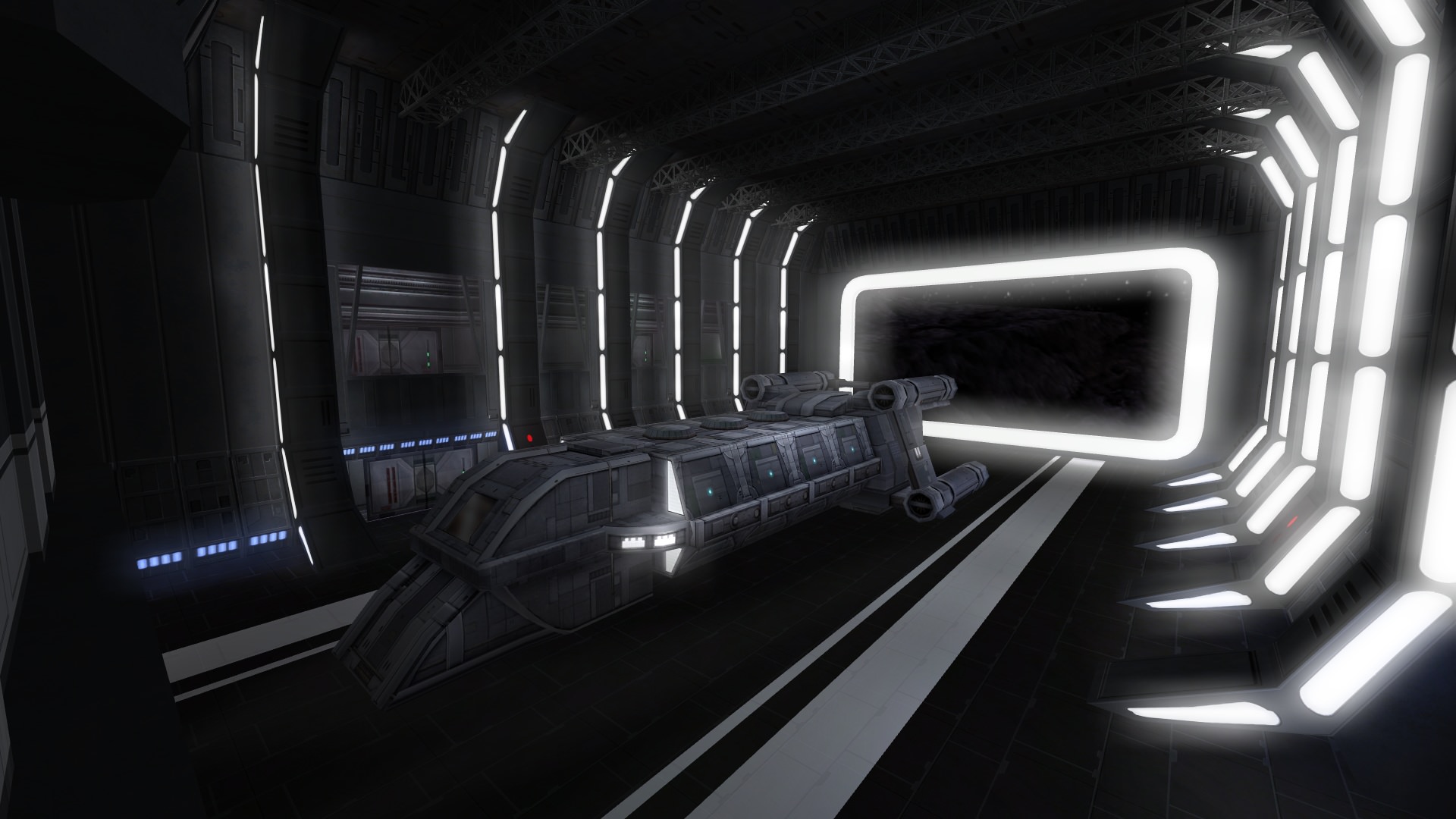 Rebel Spawn has been made a fair bit larger to accommodate some of the visual design changes. I wanted to bring the imperial style hangars we see on Star Destroyers, the Death Star, various bases in the Rebels TV show into Lunarbase. As a result of that change I needed to shift the ship back away from the main door a bit, shift spawns to be more uniformly spaced (a majority are now closer to main/side), and make the catwalk area purely visual. RIP catwalk once again. These changes also end up adding some cover around both doorways that can be used if the hangar is about to be breached. 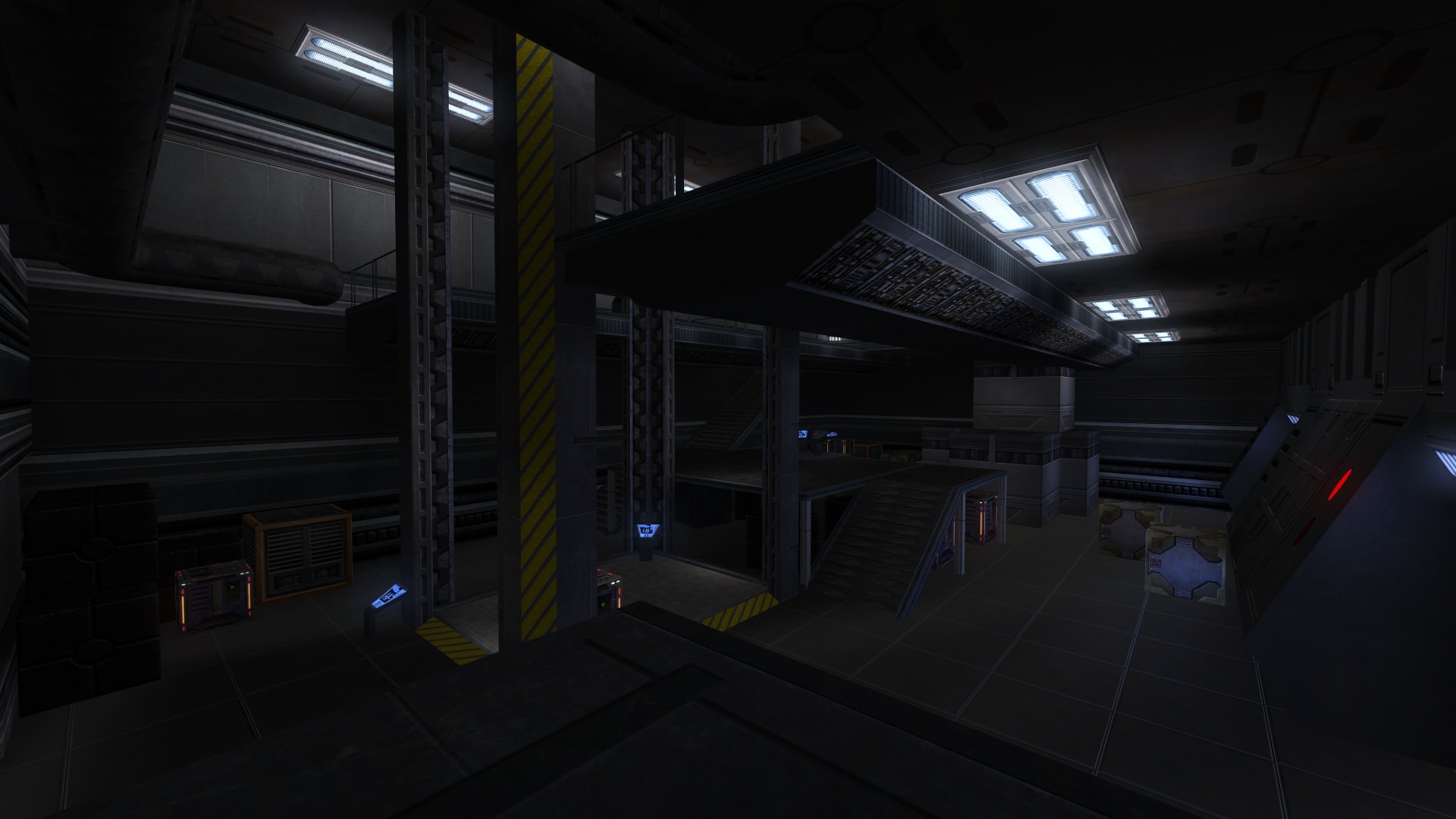 The storage room was expanded quite a bit and a secondary door from hangar was added. The goal was to bring some of this area into the main hangars gameplay region allowing people to move in and out of both areas once either of the consoles were hacked. The second hack to open these doors has also been made much more obvious. I also modified both the stairways and the elevator to flow better onto the upper area. It always bothered me having to go up those stairs and make a 180 degree turn to continue. The elevator is now more centralized within the room and can be accessed from both upper walkways when used. This also allows for an escape route on the upper right walkway rather than getting trapped in some situations if you don't have the ability to hop over the railings safely.

Doing those changes results in the Rebel team getting to the fight faster and smoother than before. Imperial side also had a similar but less drastic change that we will talk about shortly. 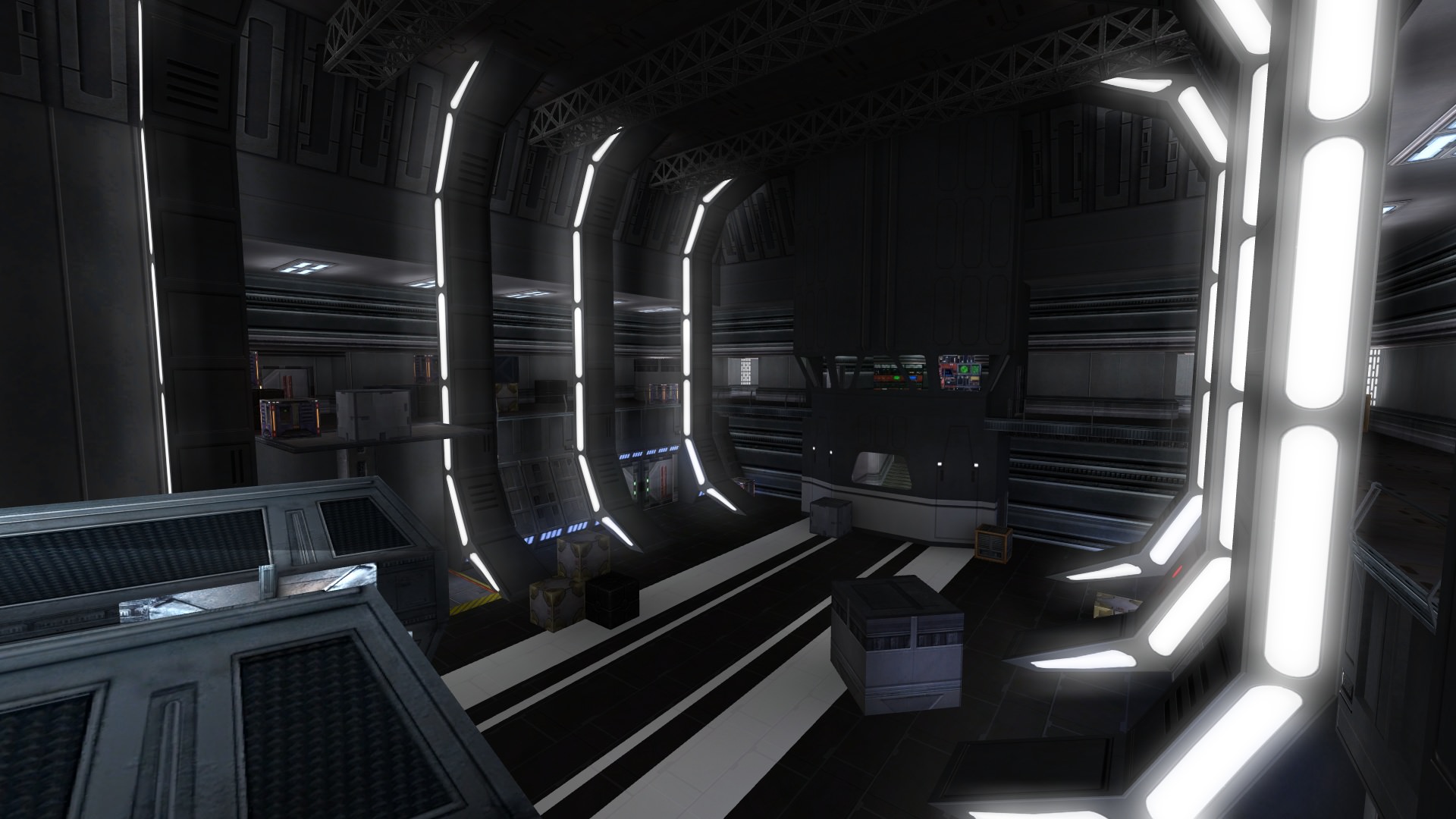 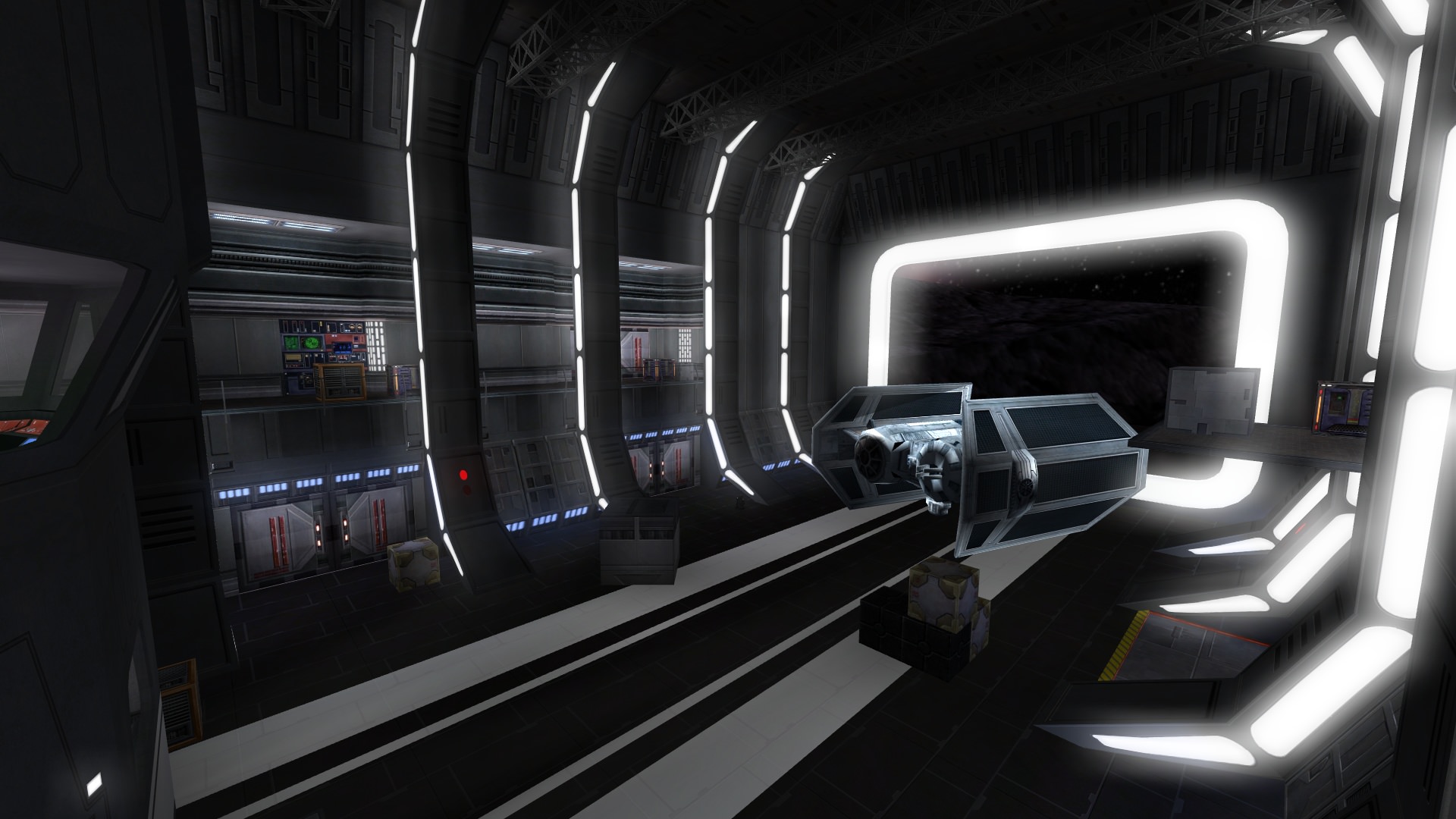 Now the Main Hangar is where we see a large majority of the layout changes to Lunarbase. We see added cover on both side walkways to help shield and protect from sniper fire, as well as less precise grenades and rockets. You can see the hangar side effect of increasing the size of the storage area. You can also see that the upper walkway area on the imperial side has been pushed back and the general size of the hangar increased in the long direction with the addition of a TIE bomber for use as additional cover and vertical play. That side has also been drastically expanded and numerous cargo containers added to allow for more play and cover in the area. If you look carefully, there is also a door on the upper walkway area. This door goes into the main hallway area and is only open to Imperials before secondary objective is completed giving them much quicker access to the upper walkway area. The elevator also now starts in the up position to add additional cover when coming out of the doorway.

The secondary objective has been put in a more centralized location making it directly in the path of either team to fight on. Rather than a place to go after the fight is over. The stairway down from the walkways is also more centralized and accessible from both sides and comes out down below the control room.

These changes thus far have lead to some more interesting, and more even fights in the hangar with a lot quicker travel time between each of the locations. 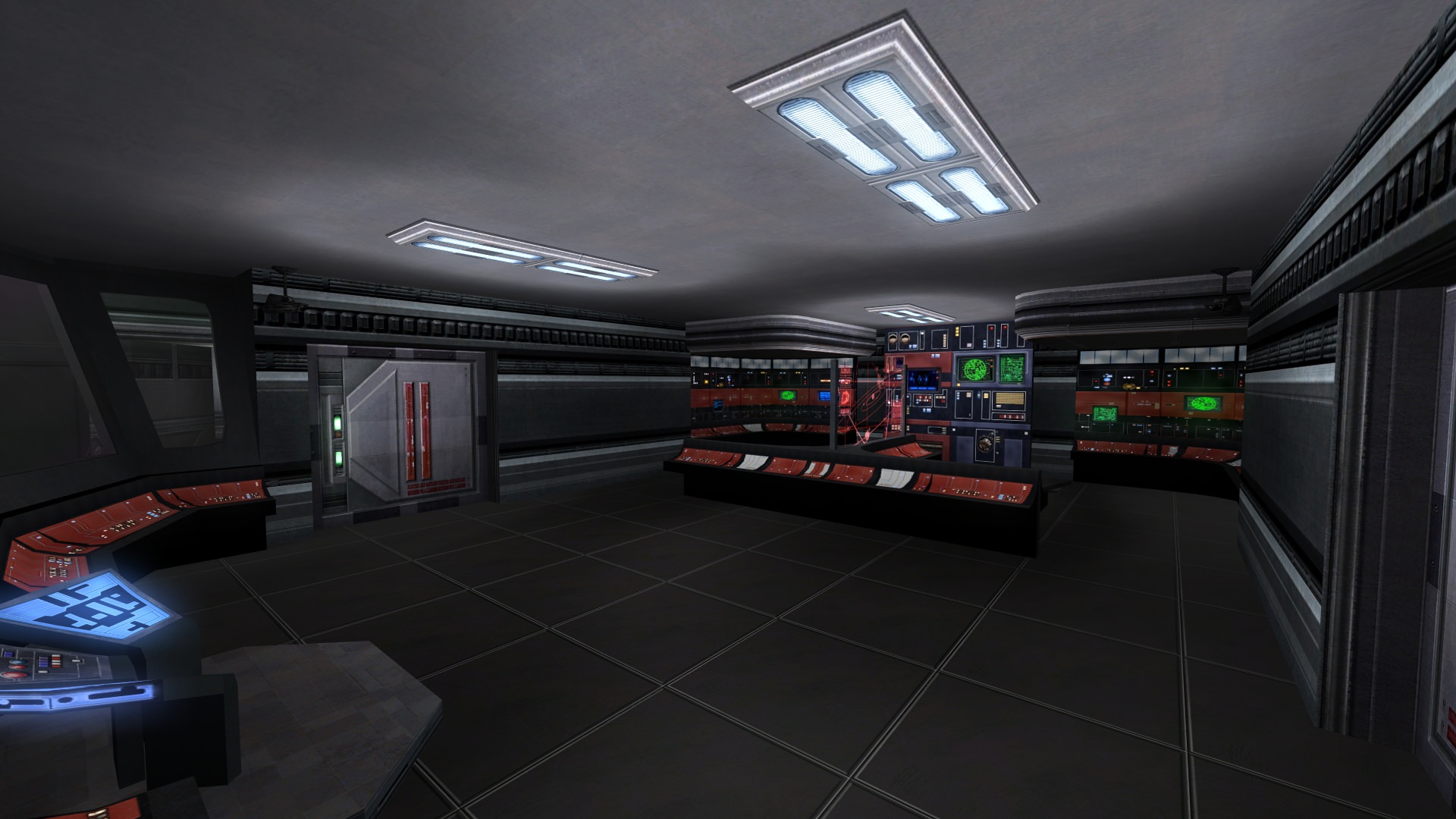 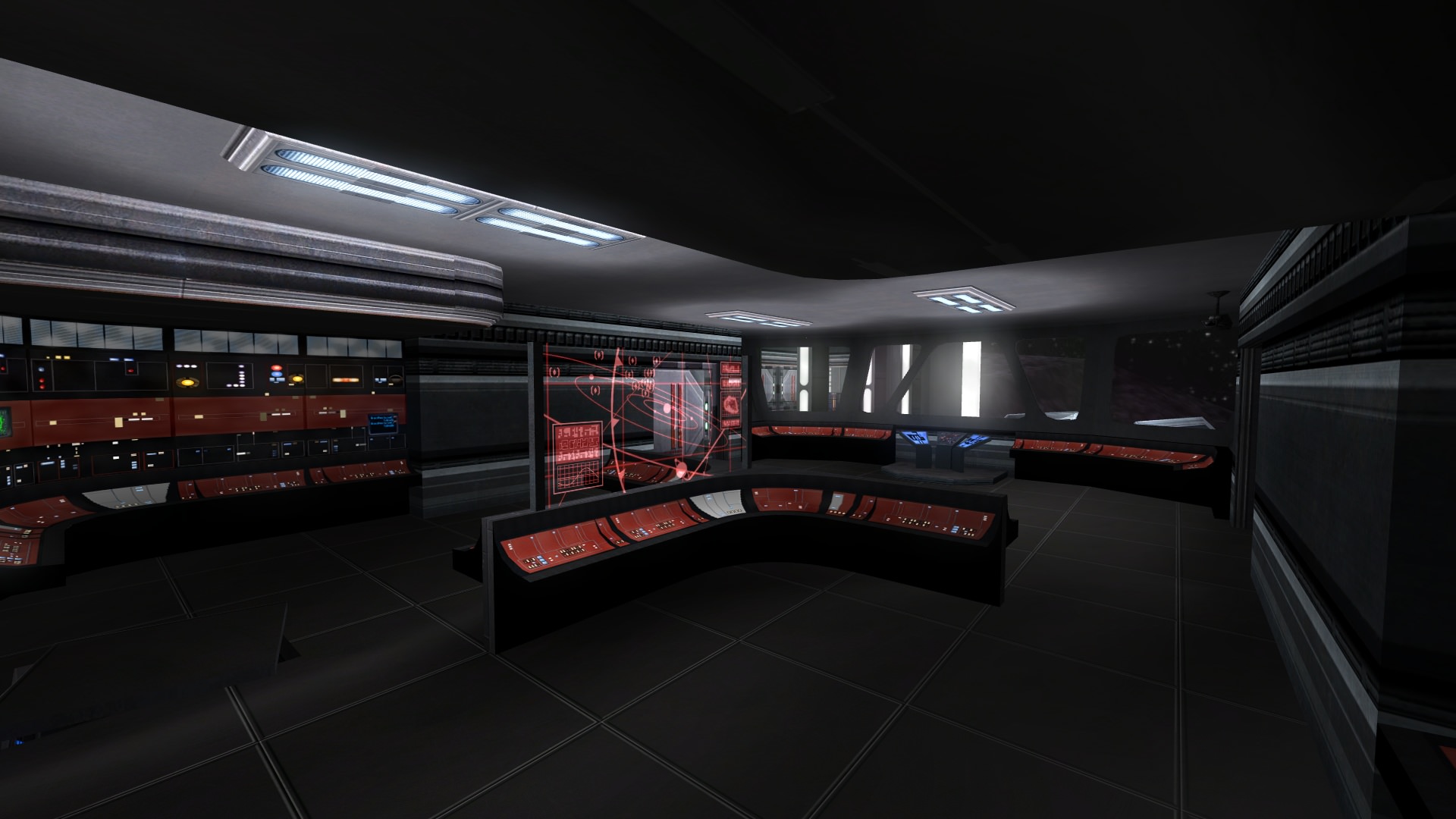 As part of making it a more central location in the hangar and a place to fight over expanding the control room was a necessity. adding cover in the form of consoles in the center of the room and some thick cover around each of the doorways. Currently Jedi and Sith can also use their lightsabers to break through the front windows of the control room as either an attack or escape route. So make sure it is safe before attempting to complete the secondary objective! 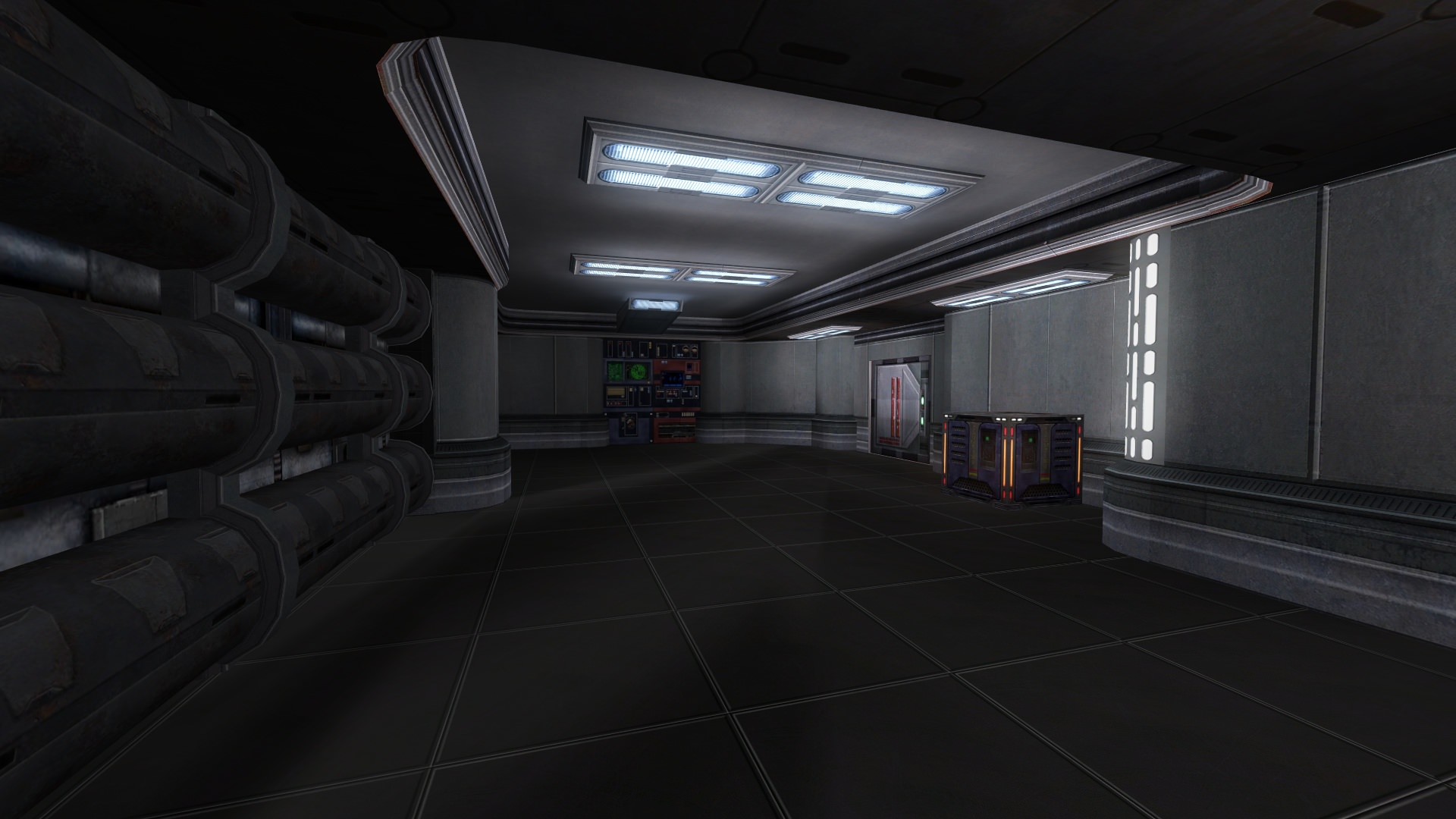 Much of the Imperial side of main remains. Layout wise there is only the addition of the door to the upper walkway in hangar. The rest is mainly visual changes and very minor cover additions. 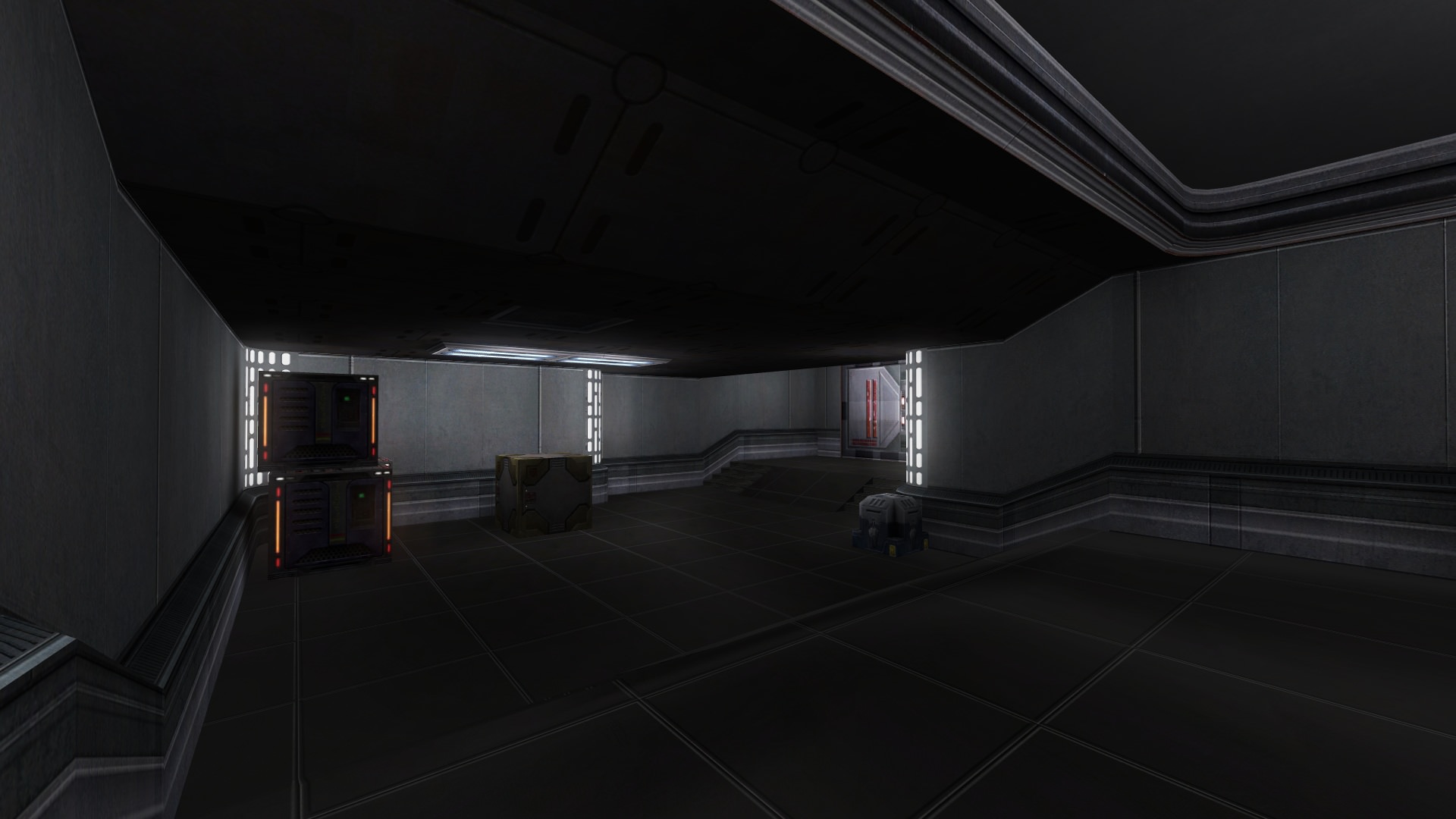 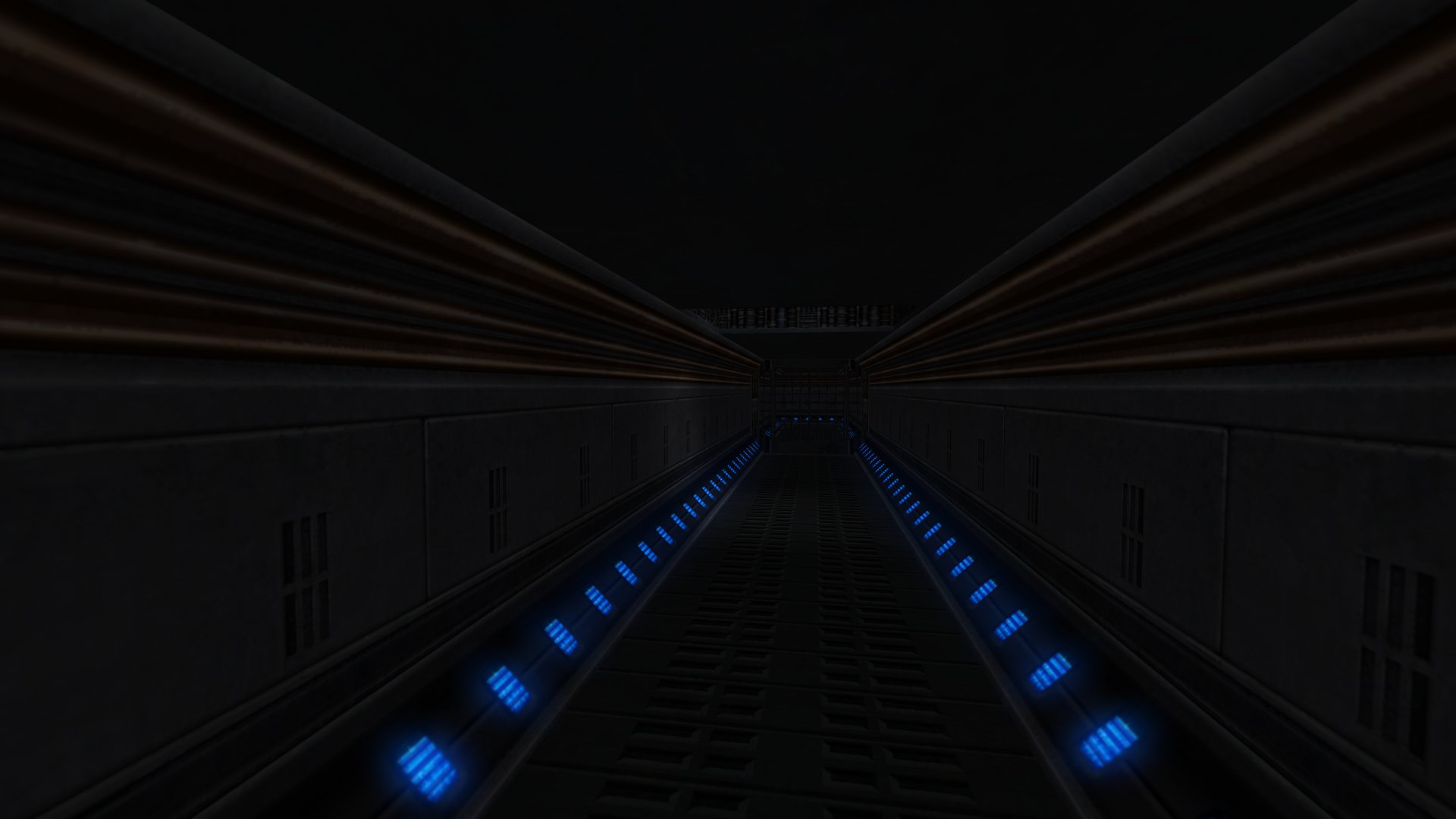 Like the Imp side of main the general layout remains unchanged. However due to the addition of the stair way in Hangar below the control room I had to make a minor vertical change to a part of the room as well as moving some boxes and changing vents. Vents are also slightly larger now and much shorter of a route. 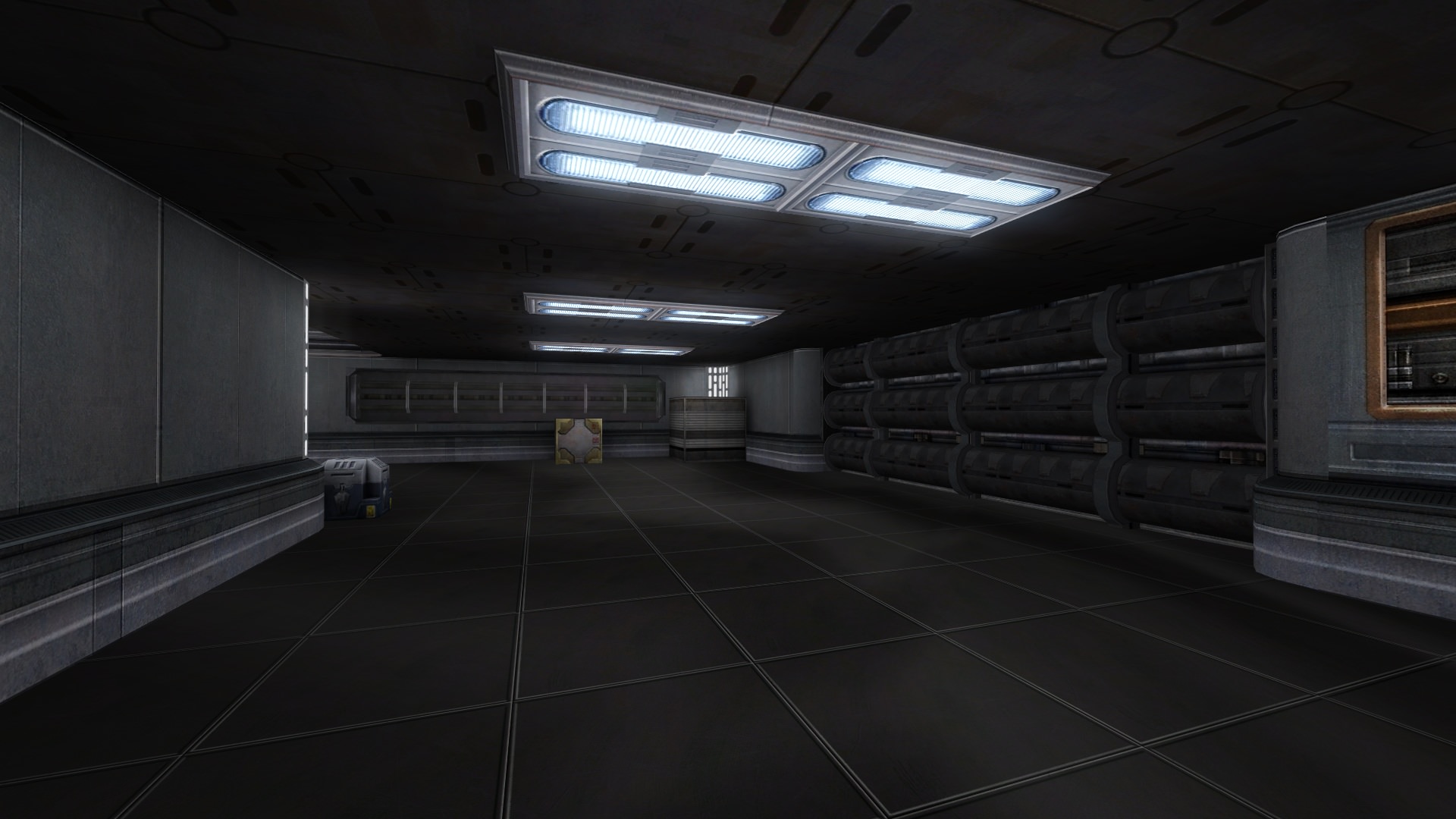 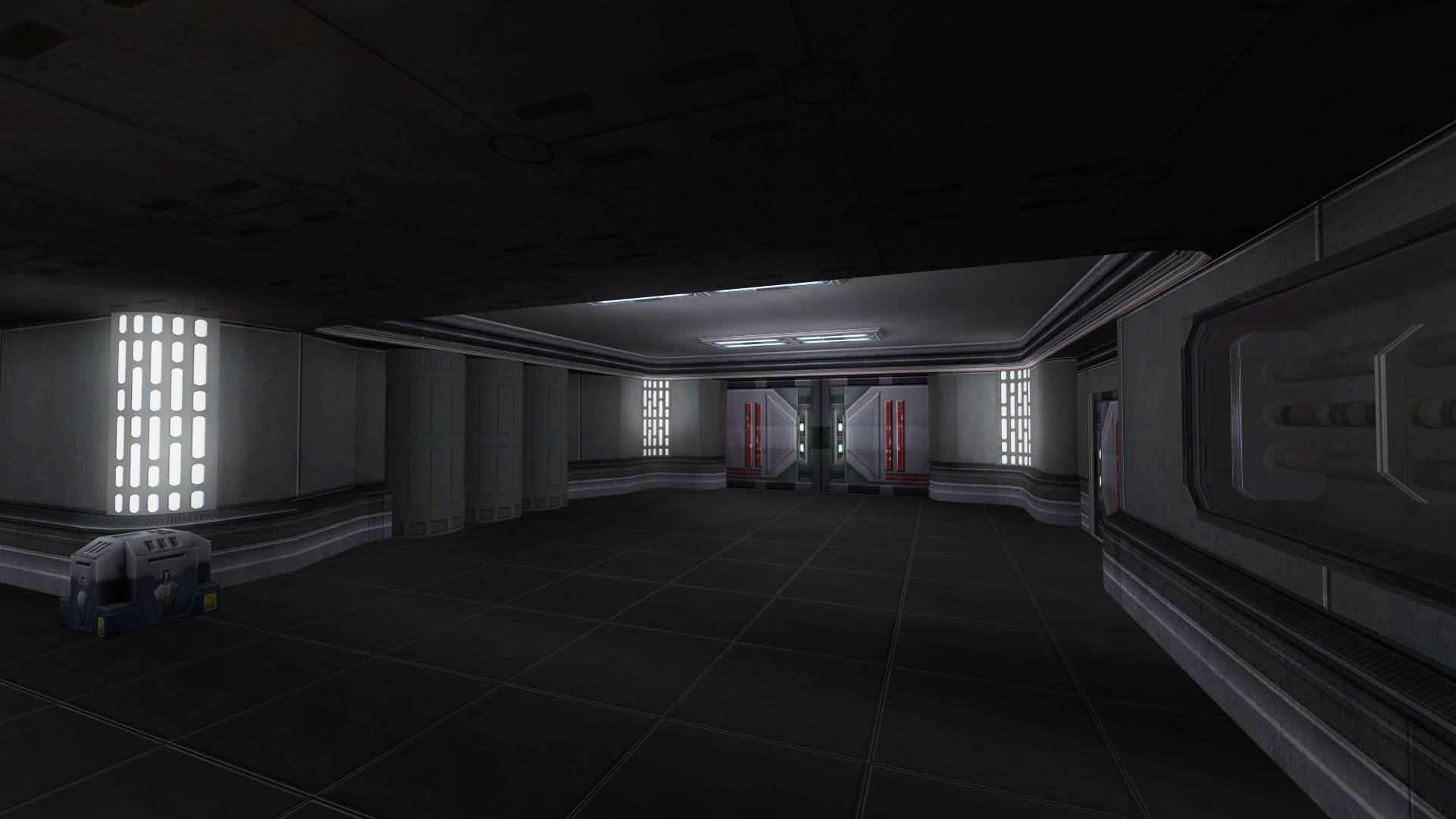 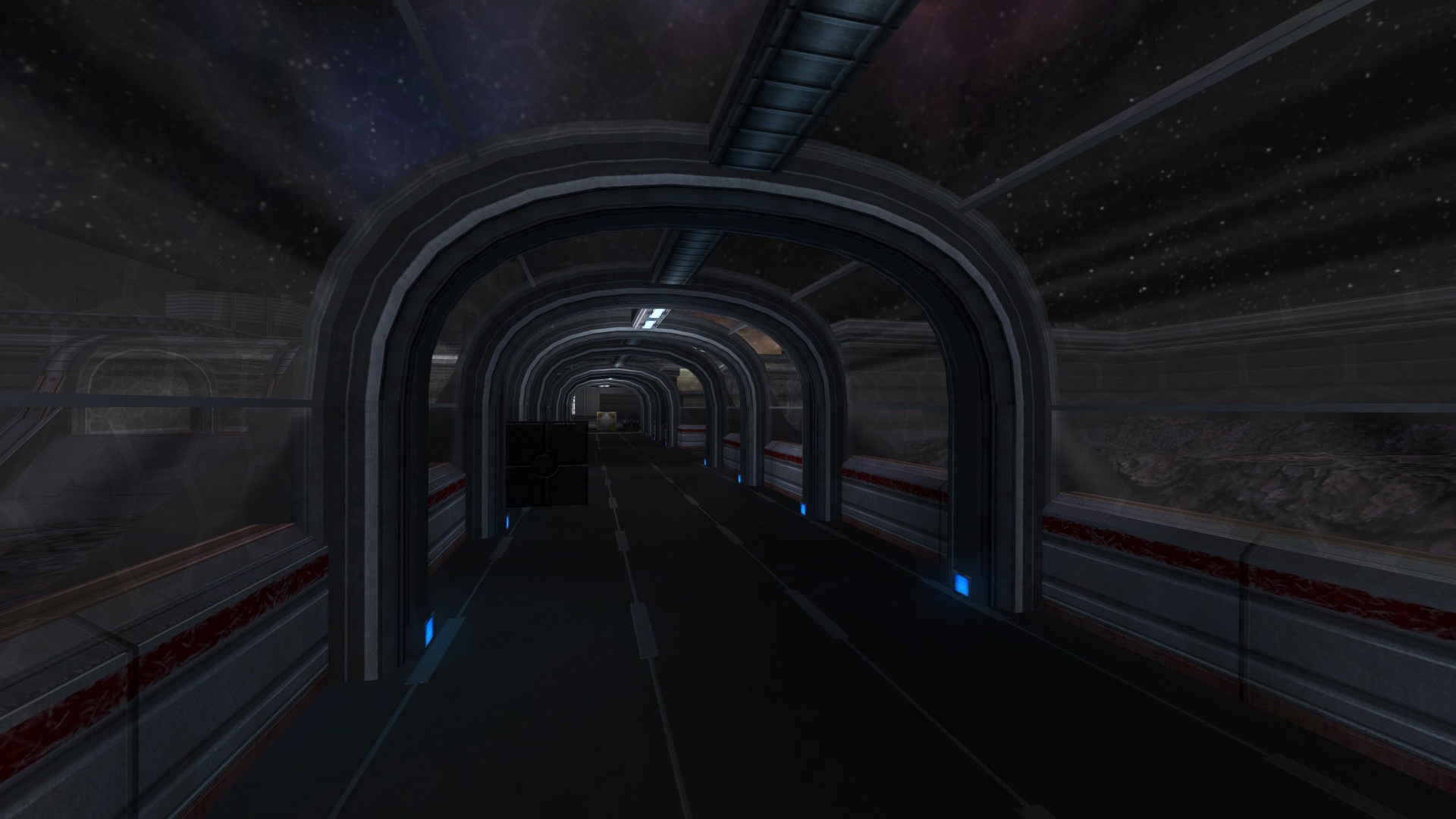 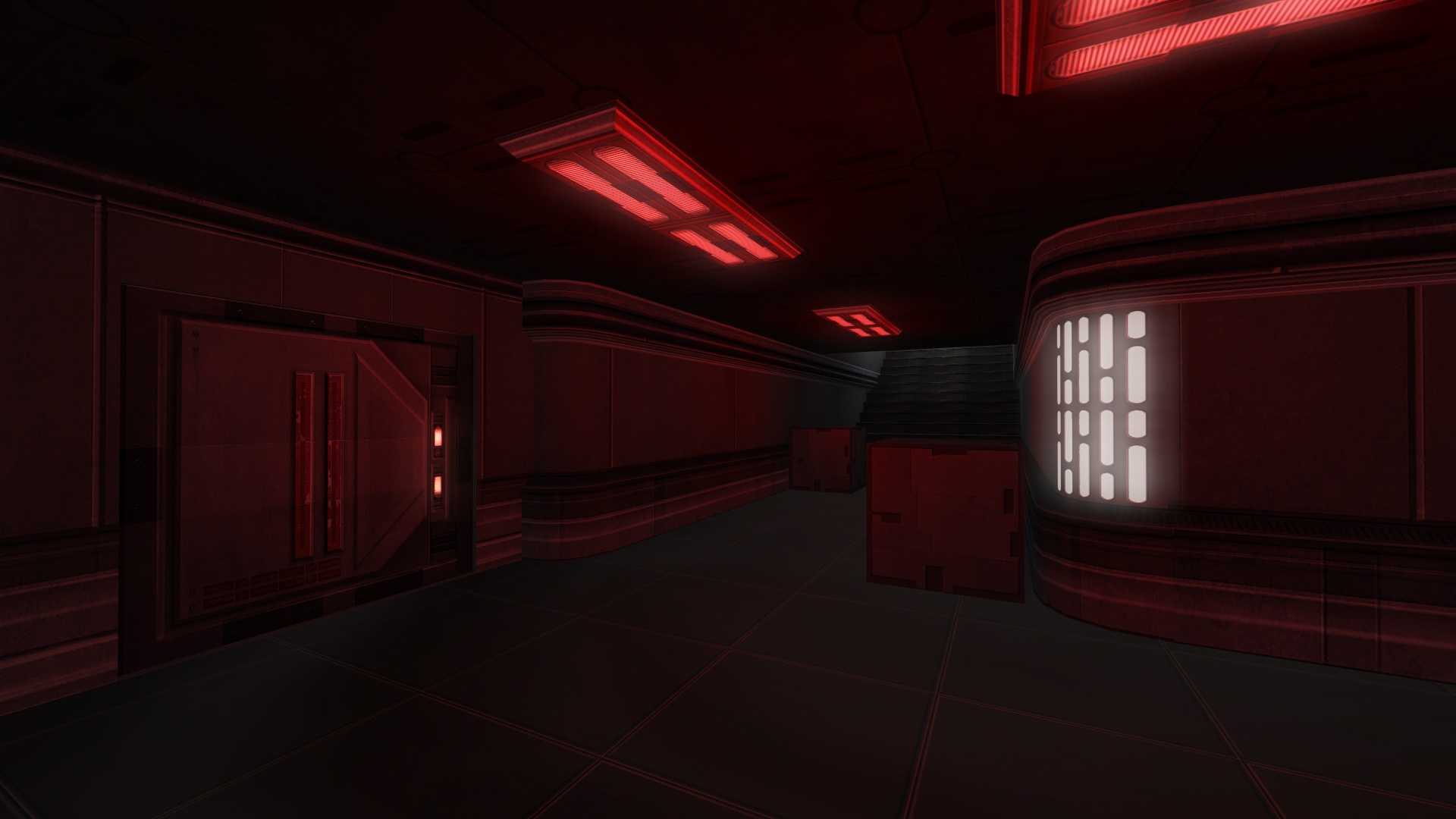 Side route remains largely the same with some minor cover additions along a few of the walls. However tunnel saw some more changes. Pillars have been added as minor cover that covers about half of a players body. A minor box Rebel side has been added. I intentionally increased the height of the tunnel to give players some more room to move, but also to preserve a lot of the bounce shot potential when reflecting blasters off of the glass. However, the additional pillars do prevent some of the low angle bounces so that will take some adjusting to. 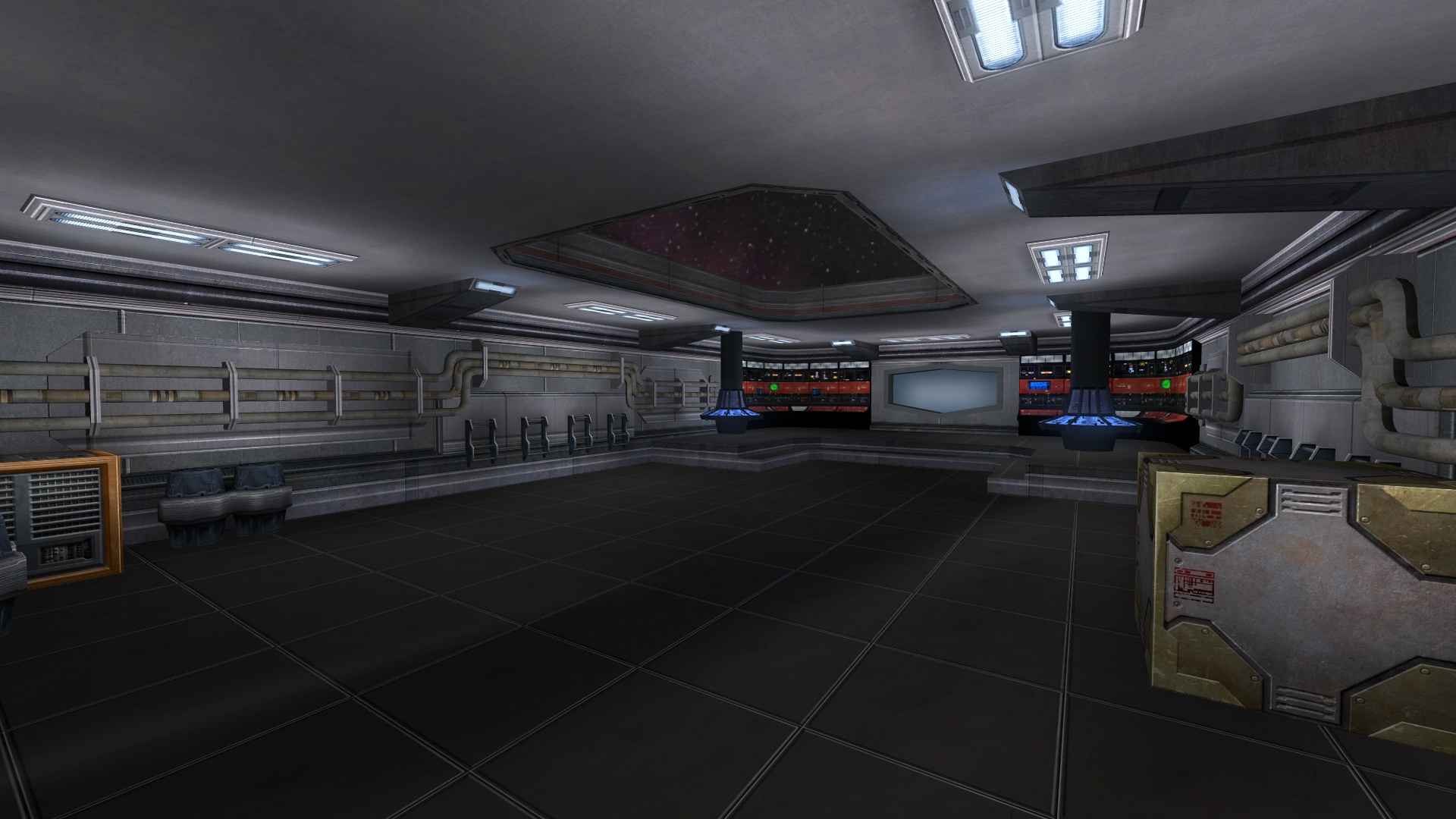 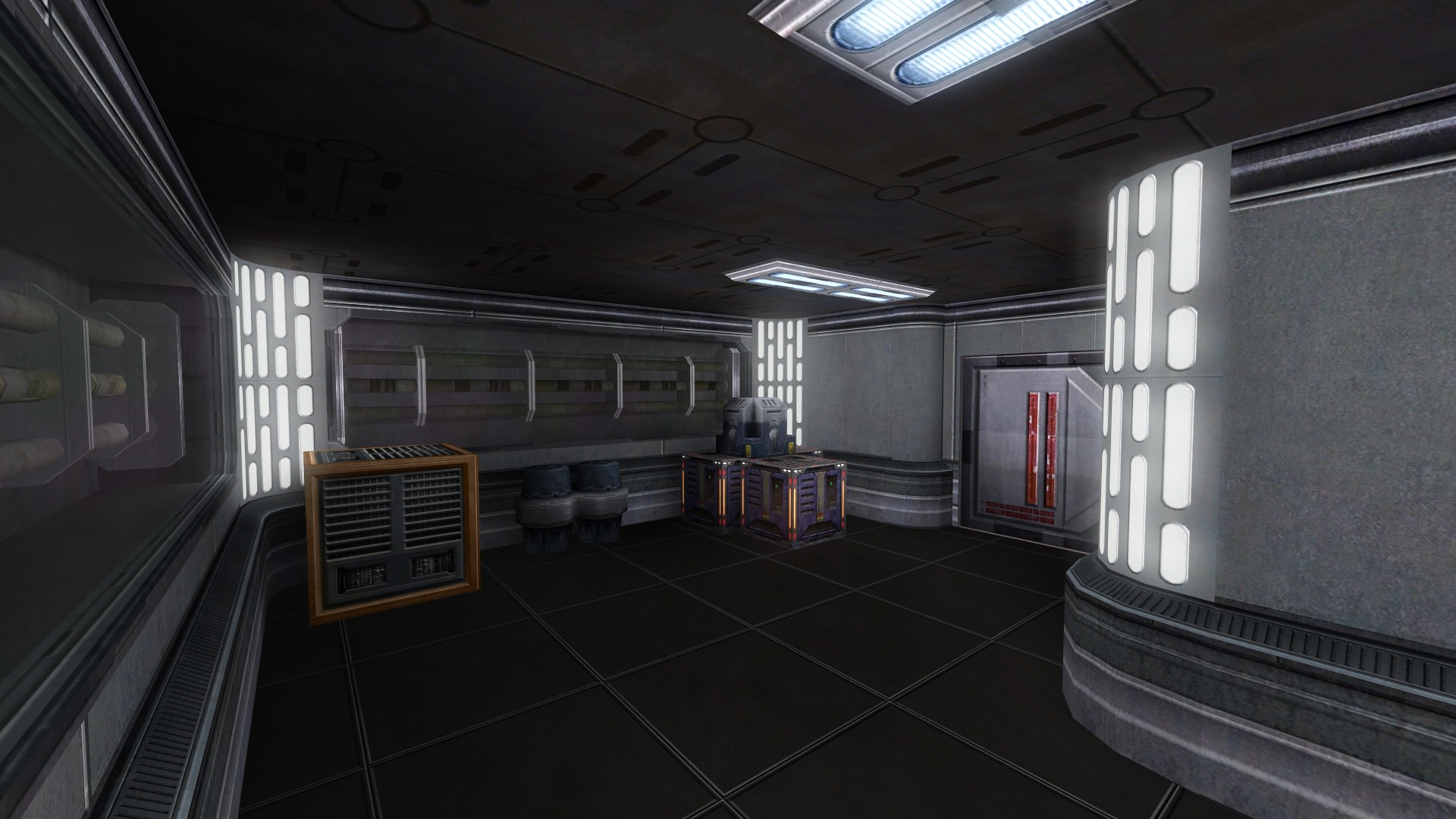 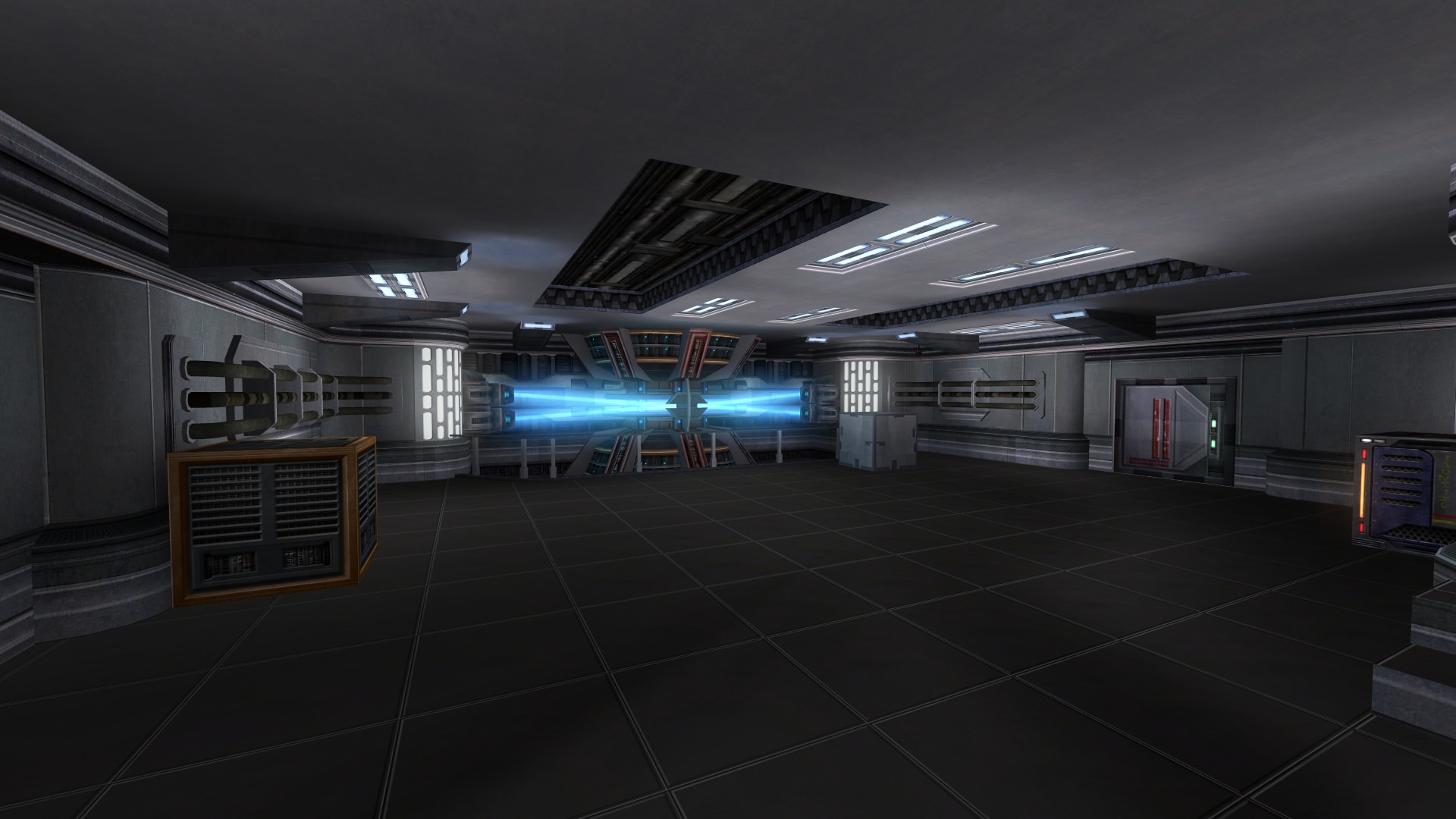 Layout wise this area is largely unchanged with pretty much all the changes being visual. A little bit of cover has been added in the imperial spawn room and the position of the generator has been adjusted slightly. There are many that feel the objective area could use some more tweeks as well but sadly that was out of the scope for this project. Maybe we can make some changes here in the future. 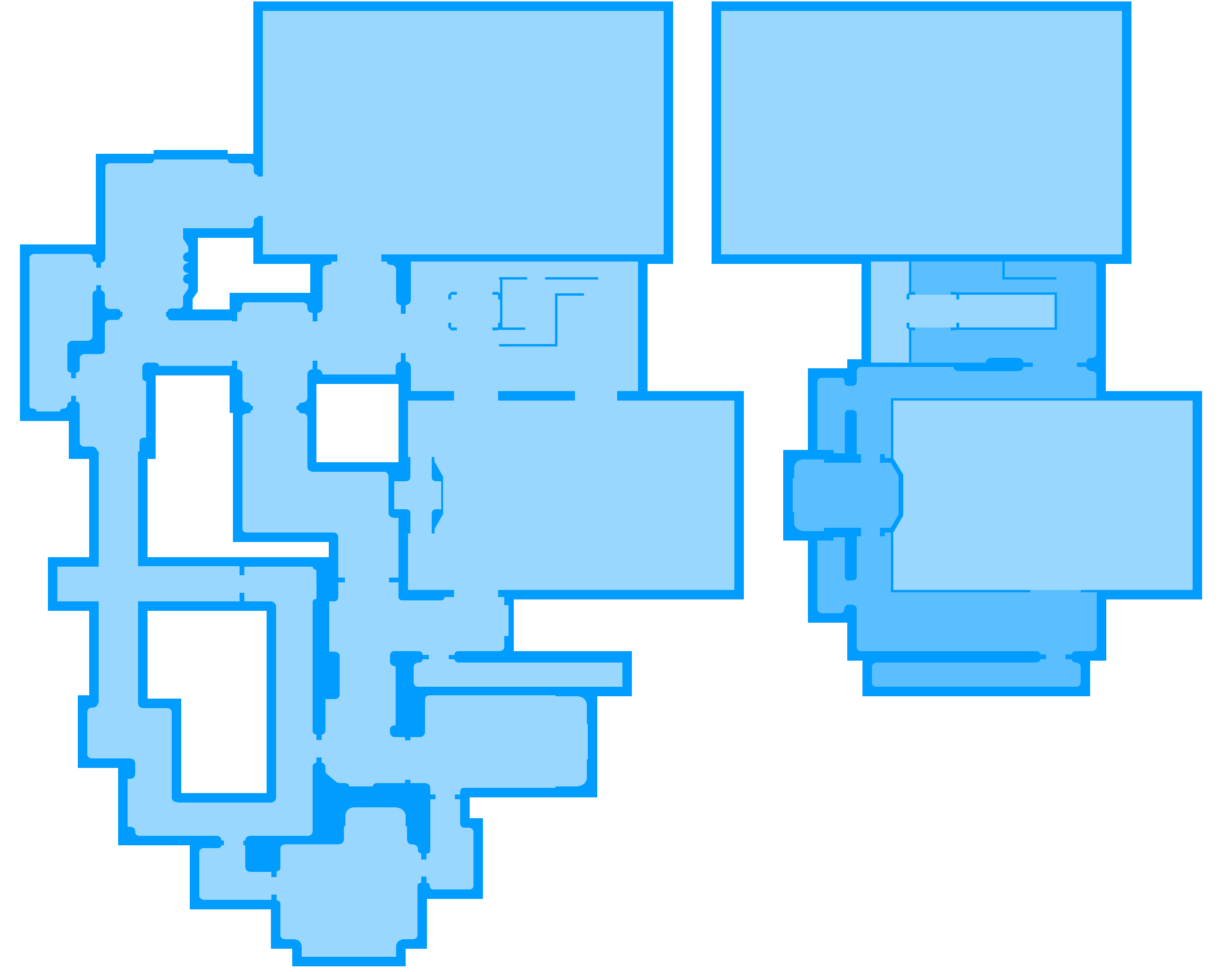 Look to see the updated version of Lunarbase out in the next few weeks!
Click to expand...

I love the new verticallity factors in storage room. Not sure how i feel about main hang yet but everything else looks very promising. The outcast feel is very strong in this one and brings with it a lot of nostalgia

Thank god it's not another lazy attempt to copy BF2 with a control point you stand in as an obj.

Frosty said:
Thank god it's not another lazy attempt to copy BF2 with a control point you stand in as an obj.
Click to expand...

I made dotf before even the first battlefront released though THEY COPIED ME!!!!!!!!

i THINK HE mEaNs BF2 claSSix

Why? Old Lunarbase was perfect.

Frosty said:
Thank god it's not another lazy attempt to copy BF2 with a control point you stand in as an obj.
Click to expand...

There's nothing lazy about the capture point if anything it was more work as it had to be coded in because that objective type isn't supported by base JA.

Looks great, can't wait to check it out!

One of my favourite maps, looking forwards to this. Side changes in particular look good.

Looks very nice and you did fairly good job with dotf, so let's wait untill we have a chance to actually play this beauty.

Looks incredible!! But we can still space ppl right?

Great job. I like that only hangar and the room before it have significant layout changes from a gameplay perspective. Those are the only ones that need it and lunar plays great otherwise. Hopefully the new layout will make it a little bit easier for rebels to attack there.

Tasmann said:
Why? Old Lunarbase was perfect.
Click to expand...

I knew it months before: mb2_dotfv2

You devs out to just make us mad? First DOTF and now this? SHAME ON YOU!

Tasmann said:
Why? Old Lunarbase was perfect.
Click to expand...

It was part of mindset when going in to try it for the first time. After playing it for a couple of rounds, I was won over.

Changes to Main were a vast improvement over the old. It's a lot more exciting to play now. Most changes are visual or simply good improvements that alleviate existing flaws such as the difficulty of attacking through the tunnel.

I love the visual changes. You really nailed that JKO feel while still being original.