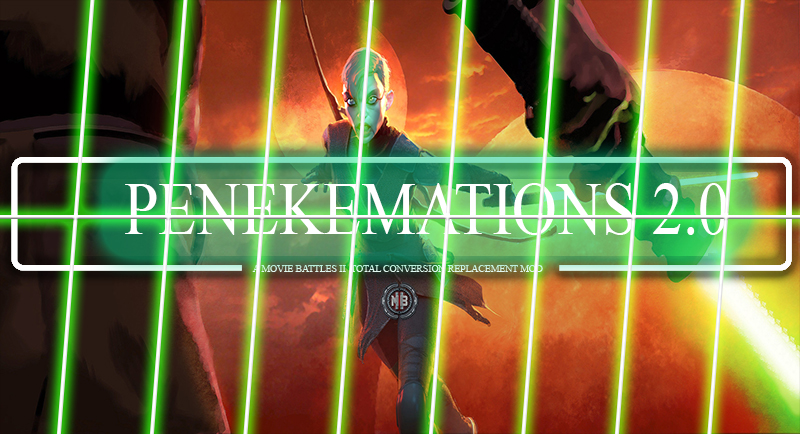 Some of you already know me, I'm the creator of the Peneke Pack (, if you've been following up with our updates lately, we've been talking about this new project that works very well with Penekepack and that is aiming to improve MBII from a visual standpoint, giving more immersion and realism. this project is called Penekemations.

The Penekemations are a compilation as well as an overhaul for a lot of cool animations that have been released on different mods, such as Movieduels II, or standalone mods from JKHUB/JK3FILES. What we've done is make them compatible to MBII, merge them and improve them for great immersion and visual improvement. Your feedback is really important to us, and we're releasing this 2.0 hoping that you guys like it as much as we do and enjoy it as much as we did developing it.

The time has come and so have I.
Sorry for making you wait this long. The mod had been finished for months but i just never found the time or motivation to fix up remaining details, but here it is!

Gameplay video/trailer : (Credits to noob for making this video for us, thank you man!)
This new iteration of our mod focuses on Movie stances as well as adding some edge to running/ gun idle animations, making it look way cooler in our humble opinion. Readme and creditswill be attached to the PK3 file

Installation instructions: Put the file on your MBII folder, no need to replace anything.

Version 1
Here's a video by one of my Peneke minions showcasing the new stuff that this pack, has. You'll finally be able to use backhand stances on MBII, something that has never been done on MBII and we're finally bringing it up to the table and of course a lot more!


Now I understand this might be something new for you guys since animation mods for MBII is something that you don't hear or see really often, so I prepared a small Q&A or people that may have some doubts: (This was written for version 1 but as of version 2 the pk3 file is separate and can be easily installed on your mbii folder)


Do I need to have the Penekepack 1.7 installed in order to make these animations work?

Will your animations mess up my pblocks?

No, they won't, while the stances might be different, the swings aren't and you still have to aim to the same position that you tend to in order to pblock.

Will the hitboxes be messed up?

No they won't. These changes are all cosmetical, think of it as an illusion, however there are some side effects, From a server/hitbox standpoint, the animations will always be the base ones, so keep that in mind when aiming to people that are meditating, it's pretty easy to get used to the new animations, and in my opinion, they are worth it.

Can you add more stances/change some stances/remove some of them?

I will always consider the feedback from the community and if we agree that something must be tweaked/removed or whatever, we'll do it.

I love most of the animations, however I'd like the 'x' animation back, can you do it?

Yes, it's possible to bring back default animations or even assign some others, we might make a tutorial for that at some point.

We're aware of that and will work with your feedback to improve that, but that's what we have for Penekemations 1.0!

I'm a tryhard, will this mod get me killed often?

The last MBII Update broke your animations, they went back to the vanilla ones! how do I fix that?

We take no credit for creating these animations except for improving them and merging eveything up for full compatibility with MBII. It's been a lot of hard work and constant fuck ups. Please know that every single author has been credited on our separated credits text file that has been attached to the rar that contains the mod
Click to expand...

Thanks for updating this Peneke. I appreciate it and all the time, work, and energy you put into these. I've been looking forward to this.

Is there anyway of removing just the Dual saber and Cyan style? never been massive on the backhand sabers

Yh how do we keep certain animations and remove others? E.g keep yellow and red stances but nothing else?

While not in our top priorities, we'll make sure to guide for it at some point. It should be pretty easy tho, just a matter of replacing a line with different numbers and that should be it. I'm sure a random dev or user will chime in and explain.

Not bad, and so far I haven't found a single bug. 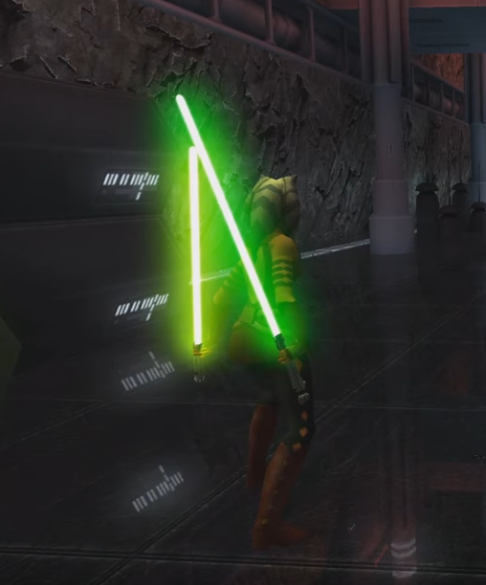 is it blocking animation or idle?

Blackburn said:
is it blocking animation or idle?
Click to expand...

how can I make this animation idle and walking? which file should I rename
+make vanila blocking anim

Penekowski said:
While not in our top priorities, we'll make sure to guide for it at some point. It should be pretty easy tho, just a matter of replacing a line with different numbers and that should be it. I'm sure a random dev or user will chime in and explain.
Click to expand...

So, DOES anyone know how to select which animations to keep?

I don't like the running animations with staff or duals at all, standing staff looks good but overall ill live without this mod

It's that time again, where I install Penekemations because I'm bored of the vanilla anims.

Red and yellow looks almost the same, however you can tell there is a small difference.
Blue and purple literally looks the same, at least while dueling, you cant tell if the opponent is using blue or purple at all.
I would bring back older red stance, it looked badass and is very different to other stances.

Great work of course, but i think that older version is better for duel mode since the stances are easier to difference, however, if you gonna play open/fa/legends this new one would be better since the animations are more developed on this version overall and there is a new idle animation for gunners
Last edited: May 1, 2020

Penekowski said:
While not in our top priorities, we'll make sure to guide for it at some point. It should be pretty easy tho, just a matter of replacing a line with different numbers and that should be it. I'm sure a random dev or user will chime in and explain.
Click to expand...

Penekowski said:
we'll make sure to guide for it at some point. It should be pretty easy tho, just a matter of replacing a line with different numbers
Click to expand...

Something about these animations seems... Unnatural. Some of those stances look sick, but the transitions are way too fast.

Dorito said:
Something about these animations seems... Unnatural. Some of those stances look sick, but the transitions are way too fast.
Click to expand...