Developer Diary - New Launcher and Open Beta​
For some time it has been our ambition as a team to be able to be more open with the whole community with in progress development and testing. Those of you who view and follow the Development Roadmap will have not only been able to see the first glimpses of that philosophy but also what is coming down the pipeline to aid that. The cornerstone of all this is the Launcher - so today I am glad to announce the Open Beta of the new launcher ... which will enable Open Betas for MBII!

Where we've come from

Today's launcher has been end of life for some time. Work was started on it more than 11 years ago and the landscape of computing has changed immensely in that period. The approach to a cross platform application that can be rapidly developed, maintained and with the full power of the platform on which it runs available is no longer possible. The Mono framework appears to have become less compatible across platforms to the point where without making any changes at all to the application, the framework would no longer run it cross platform. Additionally the person who did most of the original work on the current Launcher did it in such a way that expanding the UI to expose new features - like an Open Beta feature was not possible. The only workable part of the current Launcher is the Patcher which was rewritten a few years ago in a modern cross platform technology.

We have totally re-written Launcher from the ground up with an eye on the future. This means we are looking to keep this as piece of the mod which can be updated quickly and easily and not be a drag on peoples time. The new Launcher - which is still unfinished beta software - will when complete have total feature parity with the existing launcher - with the exception of cross platform support via the mono framework. Unfortunately this reflects the reality of the world today where the existing Launcher does not reliably work for many people on Linux and Mac. Linux and Mac users should switch to the cross platform command line updater which uses the same code as the Windows patcher but runs natively via the open source dotnet Core framework. Dropping cross platform support entirely means we have been able to switch to platform standard Windows Installer technology that every windows user is already familiar with. For us this means that we no longer have to maintain two patchers and can offload the physical patching of the launcher to well proven technology provided by the platform.

Installing the new launcher is as simple as downloading the Installer Package and running through the Wizard. Please note the requirement to be installed in the GameData directory is gone - but feel free to install it there if you wish. 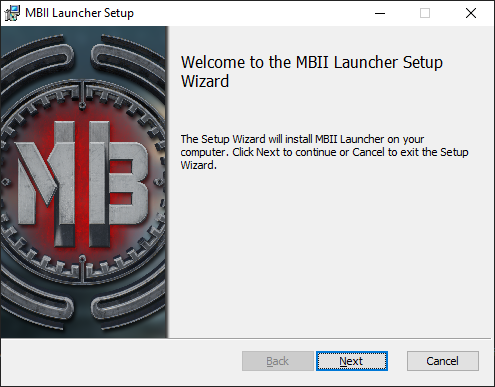 You all know what to do with this
​
Once the installer is finished, a Short Cut will be placed on your desktop and in your Start Menu as you would expect. Hopefully this will cut down on the amount of players needing support because they cant find Launcher or try and run it directly from the Zip. So you fire up new launcher and first things first - you need to scroll down and accept the EULA. The accept button is well hidden at the moment and is something that will be improved before the new Launcher leaves Open Beta. 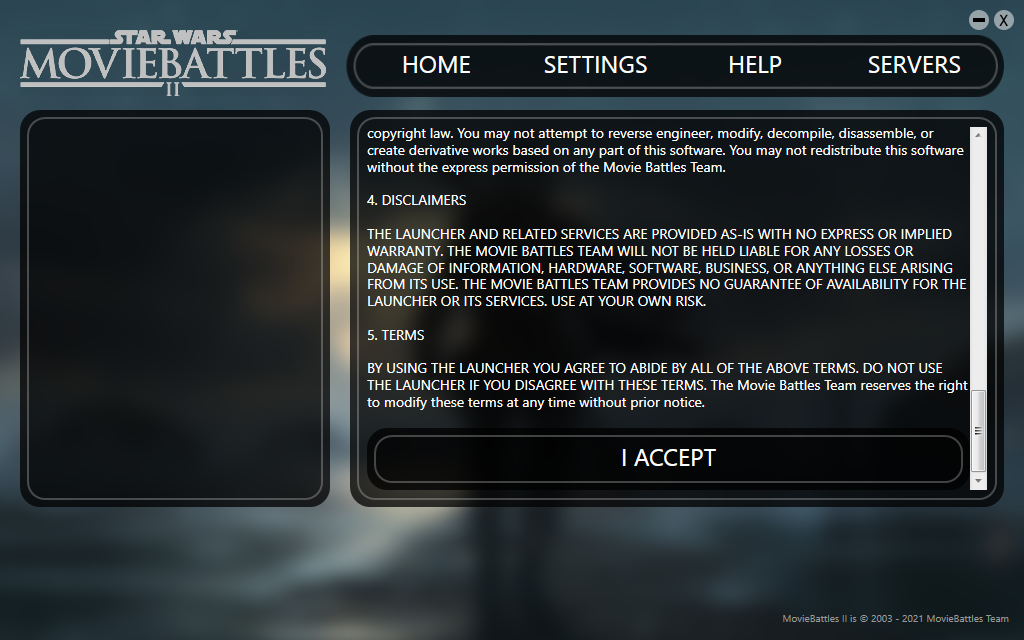 Having Accepted the EULA the Launcher will - just like the old one - look for your Jedi Academy installation. If you chose to point the installation to your GameData folder you will likely not see this step unless your Jedi Academy installation does not meet the minimum criteria to be valid. The search will follow the same priority as the current launcher does which can basically by summerised as the most recent of Retail Disc, GoG, Any other digital platform other than steam - followed by Steam. If the auto detect picks up the wrong directory you can reject the location picked by Launcher and chose your own or pick again at any time from the settings menu.

Once you have found your installation you can go straight ahead and hit the Install button (And ignore where it says 'Initialising Patcher'...). Launcher will then check that your system has all the pre-requisites for MBII Installed - at the moment this is just the Visual C++ runtime and then move onto validating your Moviebattles installation. If your MBII installation is up to date this should take no longer than starting the old launcher would have. If on the other hand you've just sat down to write a Dev Diary - Enjoy the new install animation. 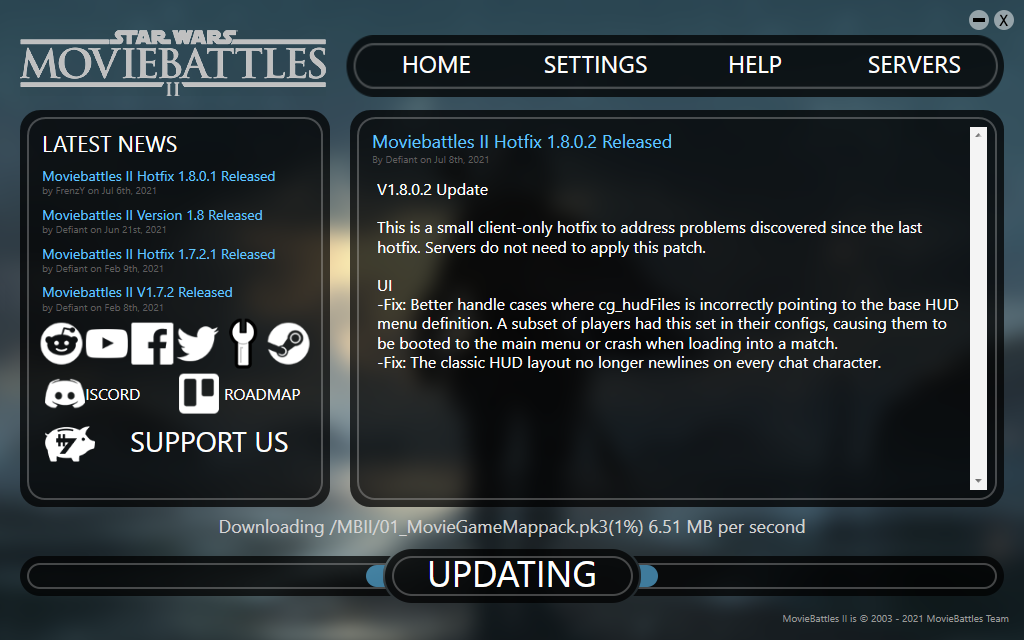 Here's one i didn't prepare earlier.​
Once patching is complete you will want to head over to the settings menu. You should set everything to as it is in the current Launcher - this should ensure everything stays working. And of course, to opt into the Open Beta CTF also happening tonight (1st of August 2021), you will want to hit the Enable Open Beta checkbox. If an Open Beta is currently running you will then be able to select the Open Beta build on the left hand side of the screen. Upon selecting this the Launcher will begin to install the Open Beta files. Any files that are unchanged from the current public build to the open beta build will be copied locally. Any updated files (Or files that have been modified on your local system) will be reacquired from the server. No configurations or Force Config files will be copied from the public game - You will have to set up your keys, binds and builds from scratch. 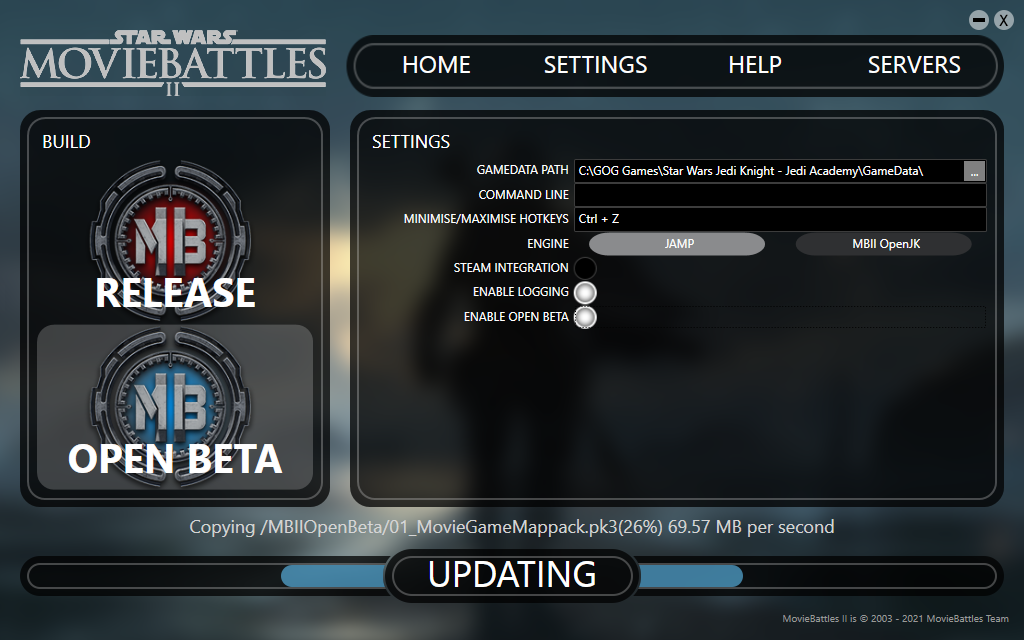 Once patching is complete, you can simply hit play to load up the beta.

Should you wish to switch back to the public build, you simply need to click on the Release build in the settings menu

Once the Open Beta period ends Launcher will inform you and automatically switch you back to the public build.


You can download the Open Beta Launcher Installer Here​
Last edited by a moderator: Oct 9, 2021
Click to expand...

What a pleasant surprise. Thank you Defiant and all the devs working on this in the last 11 years

I remember early betas we played on it like a decade ago. Some of my all-time favorite moments in MB2 happened during those tests.

Hats off to the many people along the way that have contributed to getting this out the door.

P.S.: I can't wait to test the CTF open beta server, but once I open the MBII open beta version, the list shows zero servers. Afaik there's only supposed to be one CTF NA server for open beta. Is it coming back some time soon?

Shady said:
Is it coming back some time soon?
Click to expand...

We will be doing the next beta for CTF this Friday! The server will be up for most, if not all of Friday US time. For part of the day in the evening US time, the server will be locking for a competitive style scrim on CTF. If there is still enough interest after the scrim is done from earlier in the day, the server will unlock again and remain open throughout Saturday.

There may be an update to both the launcher and CTF so be sure to pay attention to announcements ahead of time for instructions. 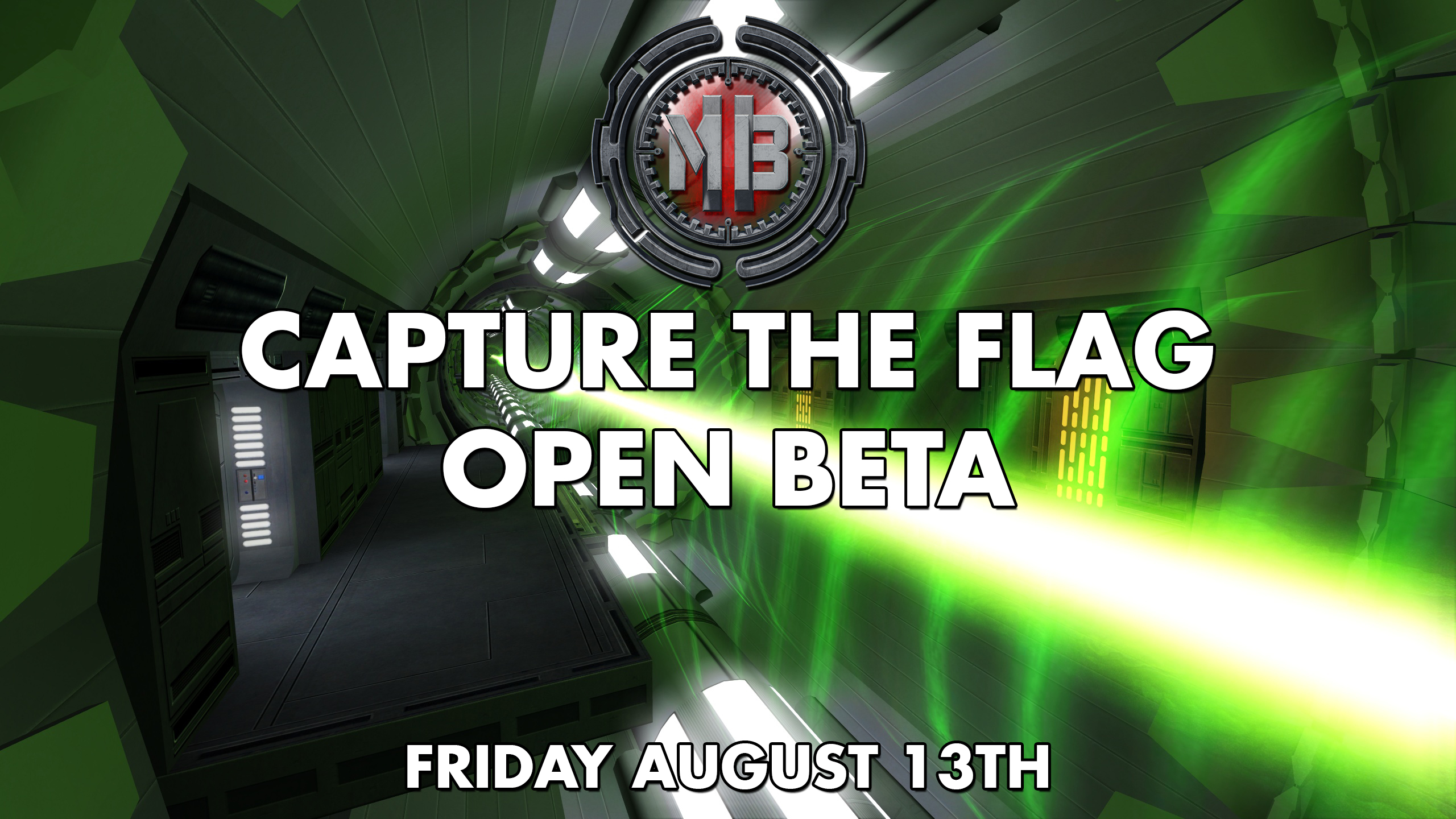 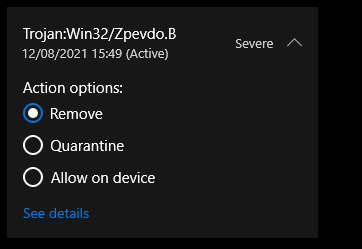 Just happened now
New launcher was took off my computer and wont let me reinstall it
Click to expand...

Just got this as well, i went to windows settings update and security then windows security check protection history and you can unquarantine and restore the files

Microsoft resolved this in defender in less than 90 minutes of reporting it as a false positive. Some other vendors also flag it but their false positive reporting either takes longer - or they dont take requests for reanalysis at all.

Is this a test launcher or something that everyone needs to download?

Need to make space on my harddrive and don't want to fiddle with things that need not be fiddled with. Unless you want me to.

This is a beta. When the time comes to do away with the old one, we will bring everyone over to the new Launcher automatically.

We have released an updated beta launcher. The only change here is that there is now an self-updating feature so future fixes wont require manual intervention. Anyone using the beta launcher should install the update from here. The current installation will be removed as part of the setup so dont worry about doing anything to prepare - just download and install.

Defiant said:
We have released an updated beta launcher. The only change here is that there is now an self-updating feature so future fixes wont require manual intervention. Anyone using the beta launcher should install the update from here. The current installation will be removed as part of the setup so dont worry about doing anything to prepare - just download and install.
Click to expand...

Once you have downloaded the updated beta launcher noted above, you can update the Open Beta build and join today's CTF beta. Today we will be hosting it for the next few hours on the EU server, before switching to the US server so that everyone has a chance to try it out with low ping. Come join and check it out!

I cant really think of anything bad. It's pretty, has quick access to things.
Assuming its user friendly, might even see a player surge.

Just needa fix some of the weird bugs

Anyone using the new Beta Launcher and who has installed the previous update to it should receive a notification about an update to the Beta Launcher the next time it is opened. This should correct the problem where the Engine and Steam integration status would reset after switching build or changing some settings. If you do not receive a notification to update or simply prefer to do the update manually - you can download the installer from here: https://update.moviebattles.org/launcher/MBII_Launcher_Setup.msi